This chapter explores what happens when particular historical narratives completely lack a physical ‘home’. The Nelson Mandela Bay Amabutho was a group of young activists responsible for ‘making the city ungovernable’ during the political turbulence and state repression of the 1980s. In 2007, the group reformed as an activist organisation agitating for material and symbolic recognition of the role it had played in destabilising the apartheid state. This is a morally ambiguous and violent history that does not fit neatly into standard heroic narratives of struggle and overcoming. The chapter discusses the ways in which this history complicates heroic linear narratives of the past. It uses the case of the Amabutho to consider possibilities for inscribing complicated or traumatic memory into the urban landscape in the absence of public recognition, largely through performative means such as song, storytelling, protest, dance and the spoken word. Ultimately this history of the Amabutho and other vigilante anti-apartheid groups like them remains an unacknowledged scar in South African urban liberation history. Yet, these stories insist on being made visible, and in the minds of those who lived this history the city streets remain powerful if unmarked mnemonics for this past. This history continues to come to the surface in unexpected and embodied ways, ‘leaking’ into the consciousness of the present.

This chapter considers the possibilities for public art – whether monumental or ephemeral – to act as a point of access to urban collective memory, and what the politics are of these kinds of public representations and contestations. The politics of public art, public space and the visual languages used to reflect the city’s collective history also play out in relation to colonial statuary, buildings and street names. The city’s histories of dispossession, forced removal and segregation remain etched into its streets and public spaces, as is the case in many South African cities and indeed many colonial cities elsewhere in the world. In 2010, a public green space on a hill in the city centre, the Donkin Memorial, was refurbished by the Mandela Bay Development Agency. Part of this refurbishment was a public art project in which artworks were placed along a winding pathway to the top of the hill, intended to symbolise Mandela’s ‘Long Walk to Freedom’. This triumphant, branding-friendly work is contrasted with the less-visible, often ephemeral methods by which the Black Consciousness activist Steve Biko, who was interrogated by Port Elizabeth security police in the city before his death, is remembered. These figures and biographies point towards the many layers of memory which co-exist in urban public spaces, and the politics of accessing this archive of memory embedded in city streets and squares via the aesthetic realm.

The book focuses on the Nelson Mandela Bay Metro in South Africa’s Eastern Cape, using the city as a case study to read the ways in which memory is being written into South African urban space two decades after the end of apartheid. At the core of the book is the question of how history is written into public space, and how inscriptions of the past and its meanings are being challenged. This reading of public space and memory is located in a context where the promises of ‘reconciliation’ and the ‘rainbow nation’ are largely falling apart, and one in which South African cities remain in dire need of dramatic spatial and social transformation. The book is organised around four examples of memorial sites/practices, highlighting some of the ways in which public memory has been circumscribed by the state as well as the ways in which this circumscription has been contested. These include the Red Location Museum of Struggle, a highly contentious museum project; histories of forced removals in the suburb of South End; the activism and iconography of a group called the Amabutho, which was active in the city’s townships during the struggles of the 1980s; and heritage-related public art projects in the city centre. These examples collectively illuminate the spatial politics of memory in the twenty-first-century post-apartheid city, and the intersections between urban transformation and public memory.

Chapter 7 considers non-participation and exclusions as well as reservation, consternation and rejections around genomic medicine in our research and in the public sphere more generally. We investigate the particular social and cultural contexts in which disengagement and resistance are generated. Exploring negative views and experiences or simply a lack of response to genomic medicine, we consider when these kinds of personalised medicine are ‘not relevant to us’ and why some people just do not have the capacity or resource to engage with them. Rejecting or refusing opportunities to engage with genomic medicine also results from the awareness of competing priorities such as health equality or preventive healthcare as well as a commitment to other forms of care. Not every patient can or wants to craft their own treatment pathways, or looks to the future with a sense of agency and control, and we reflect on what it means to opt out, be excluded or feel left behind by these kinds of research and care. We also discuss the ways in which different agencies and actors strive to tackle disengagement by reaching out to different communities to appeal to their sense of responsibility towards contributing to the prospects of better care for individuals and community now and in the future. We argue that these practices present an important counterpoint to the dominant, inclusive vision of P4 medicine, particularly with regard to personalisation and participation. 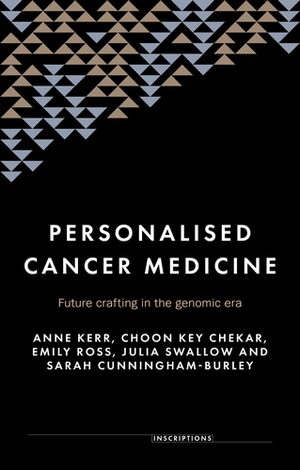 Chapter 2 explores the promise of prediction and prevention of recurrence in personalised medicine for some kinds of breast cancer through the case of a genomic technique already widely adopted within the NHS across the UK: gene-expression profiling. We consider a genomic test, Oncotype DX, which seeks to identify, among early breast cancer patients, those who would or would not benefit from chemotherapy to prevent future recurrence. The aim here is to limit exposure to chemotherapy, which can be toxic and debilitating. The test was promoted to the health service, practitioners and patients as a means of prediction and prevention, including via practitioners’ and patients’ contributions to processes of regulatory and clinical decision making surrounding the test. Considering how the test was envisaged as a benefit to the NHS and to patients in policy, practitioner and patient accounts of their experiences of decision making regarding chemotherapy, we explore how it fitted in with already complex cancer experiences and hopes for a cancer-free future. We look at how the narrative that the test offers reassurance and prediction came to dominate policy, but also consider situations where prediction and prevention were more contingent and provisional, particularly in the context of clinical encounters.

Chapter 5 is about large-scale national studies, recruiting patients with a range of cancers to collect extensive molecular information about cancer and ultimately inform routine patient care via precision medicine. We focus on Genomics England’s 100,000 Genomes Project. After discussing the rise of these mass-participation initiatives and their strong national imaginaries of economic development and cutting-edge healthcare, we explore how practitioners, patients and families made sense of participation, and how this related to their investments in particular institutions and futures. We explore the participatory logic of these initiatives, and the ways in which informed consent processes and genomic literacy agendas were developed and enacted to increase participation. We contrast efforts to improve genomic literacy and informed consent by clearly demarcating personal benefits in terms of improved care from the research dividend to the NHS, but with blurred boundaries in practice. Patients and family members were seeking care through participation and reworking efforts to improve their understanding to establish their worth as a patient and ensure optimal, personalised care into the future. We explore how this was managed by professionals to meet the aims of the programme despite their reservations about its value and implications.

While many cancer patients experience molecular diagnostics and targeted therapies as part of standard treatment or through clinical trials provided free-of-charge through the NHS, others turn to private providers to craft their own care pathways, utilising private health insurance, savings, taking out loans or raising money via crowdfunding online. In Chapter 6, we explore how practitioners, patients and their relatives seek to tailor their care and treatment pathways via these kinds of engagements with private healthcare. We examine ambivalence about access to expensive experimental treatments as part of NHS or private care, and draw associations between optimisation, actionability and adaptability via personalised diagnosis and therapies and patient entrepreneurship, and the intensified responsibilities for health and healthcare therein. Through this exploration we situate personalisation in relation to transformations in citizenship and consumption via social media platforms, and argue that this brings another layer of care, biosociality and identity work for patients and their relatives as they navigate the hope and social obligations of personalised cancer therapies.

In this chapter we introduce the topics, case studies and the main themes of the book, exploring the medical and scientific, political and economic backdrop to personalised cancer medicine as the context for our study. After briefly outlining our methodology, we describe our orientation to the subject, the key questions and academic influences we have drawn upon and introduce each of the chapters to follow.

Chapter 3 explores another technique that offers personalised predictions of responses to treatments for cancer based on molecular profiling, this time for later stage gynaecological cancer patients seeking to prolong foreshortened futures in a non-curative context. Gynaecological cancers encompass cancer of the womb, ovaries, cervix, vagina and vulva, and mainly, but not exclusively, affect post-menopausal women. Awareness of these cancers is low compared with other cancers such as breast cancer (in women); diagnosis and treatments and a range of campaigns and research agendas have been developed to address this. We consider a commercial test developed by a company we are calling Virtue, not yet in routine use, that was embedded in a feasibility study in one hospital. We looked at how the feasibility study was part of building a network of collaborations and an evidence base to extend molecular tumour profiling in gynaecological and other cancers. We explore how expectations of precision and actionability were fashioned yet not always realised in practice, and focus in particular on the kinds of work this involved for practitioners and patients.

In Chapter 4 we explore another route by which advanced cancer patients are offered the promise of tailored treatments that may prolong their lives, focusing on an adaptive multi-centre trial for lung cancer that aims to optimise treatments through a process of ongoing adaptation. Lung cancer has a lower public profile than some other cancers and it remains highly stigmatised because of its associations with smoking and higher prevalence among disadvantaged socio-economic groups. Concerted efforts are underway to enhance understanding of the disease and to develop new treatments. We show how the promise of the trial and targeted approaches offered a glimmer of hope for patients and practitioners coping with a bleak prognosis. We explore how the trial, treatments and patient and institutional futures were optimised in these very challenging circumstances. We look at how disappointments, failures and anxieties were navigated by patients and practitioners through containing scepticism backstage, calibrating expectations of extended futures, and cultivating expectations that other patients will benefit in the future instead.