This article focuses on women at Owens College, Manchester between 1883 and 1900. It does so through the lens of the everyday places, spaces and material features that symbolically defined an everyday experience on the periphery of college life. Having achieved admission to Owens in 1883, the first women to enter this newly coeducational space were met by hostility and resistance that expressed itself both in words and the careful guarding of formerly male preserves. This article therefore examines the objects, doorways, rooms and lecture halls that formed the daily environment for women as they crossed the boundary of Manchester’s Oxford Road. It considers how they navigated and appropriated space within the college and how, physically and discursively, they carved out room to belong. 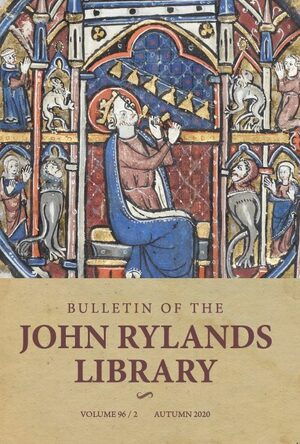 This article examines a notebook owned by the poet and topographical writer Norman Nicholson, which is held in his collection at the John Rylands Library. The notebook, entitled Topographical Notes: Morecambe Bay etc., includes detailed notes and sketches taken at numerous locations in Cumbria, many of which recur in Nicholson’s poetry and topographical texts. The article analyses Nicholson’s note-taking practices, with particular attention to sensory experience and how this was expressed by the writer. The notebook is especially valuable because no other book of its kind survives in Nicholson’s archive, and because it can be dated towards the end of a long interlude in his career as a poet. The notes can be understood as lying in the space between Nicholson’s poetry and his topographical writing: although ostensibly collecting information for Greater Lakeland (1969), Nicholson’s treatment of light and vision suggests that he was beginning to experiment with some of the themes that characterise his later poetry. The article reflects on what these notes can tell us about Nicholson’s note-taking ‘in the field’, and suggests that his habit of treating the landscape as a repository of history is akin to what Kitty Hauser has called the ‘archaeological imagination’.

The Manchester Royal Infirmary Students Gazette (1898–99) and its subsequent titles, the Manchester Medical Students Gazette (1901–13), the Manchester University Medical School Gazette (1921–59), the Manchester Medical Gazette (1960–78) and Mediscope (1979–98), are a valuable resource for the history of the social and academic life of the medical students and the work of the Medical School at the University of Manchester. The volumes provide a record of advances in medical practice, historical articles and biographical details of staff. A recently completed database of the main articles and authors is a new resource to research these journals. This article sketches the history of the Gazette and outlines its value as a source for medical historians.

This article is concerned with a gigantic unpublished dictionary of Ancient Greek, most probably compiled at Alexandria during the first half of the sixth century ad. The dictionary is ascribed to Patriarch Cyril of Alexandria, an ascription strongly doubted. It is the first Greek dictionary which unites entries (usually rare ancient Greek words) found in Christian as well as pagan writers. The article investigates the ideology of the lexicon, which is strongly Christian, but also displays a warm acceptance of the classical literary past. The lexicon became the most influential in the history of Greek lexicography, having influenced almost all medieval Greek lexica (Hesychius, Synagoge, Photius, Suda, Zonaras and others). The article assembles all the information available today concerning the complicated history of scholarship on the lexicon, whose 200 preserved manuscripts and different surviving receptions have long puzzled scholars.

The John Rylands Library’s recently rediscovered Spencer Album 8050 contains a proof state of the Battle of the Romans and the Sabines, an engraving pivotal in the short-lived but ambitious collaboration between Jacopo Caraglio (1500–65) and Rosso Fiorentino (1495–1540) in Rome. This proof impression was first printed in black ink, and then densely covered with hand-drawn ink. A comparison between the new proof state and previously identified states of the engraving using a novel technical approach involving long-wave infrared light to isolate the printed lines optically indicates that the Spencer proof state precedes any other known state of the engraving. The use of penwork and printing on this early proof and subsequent proof states demonstrates how Caraglio and Rosso saw drawing and printing as intimately connected, iterative steps in the print’s production.