This chapter is concerned with the possible divergence of public and private responses in 'the discourse of spirits' and the implications of this for understanding of the decline in the 'public discourse' of witchcraft, magic and the supernatural during the eighteenth century. In a relatively free society where public opinion and its correlate, market demand, were held to be superior to professional or state control, the discourse of empiricism and enlightenment was open for appropriation by all sides. The evidence presented in the chapter suggests instead both that public discourse may be only an approximate guide to private belief, dependent on the rules of public debate, but also that those very rules of public debate may themselves have moulded private belief, at least in the longer term.

This chapter discusses the significance of ‘misreadings’. Eighteenth-century participants and constituencies of interest could – wittingly or unwittingly – ‘misread’ the publications and events of the period, contributing to the origins of modern myths about the eighteenth century. The main discussion here, however, focuses on the role of public opinion in intellectual change on core Enlightenment topics such as toleration. The dominance of the top-down model of intellectual change has prevented due recognition of the role of the wider public in the formation of the idea of religious toleration. It is also asked whether it is appropriate for modern (or postmodern) historians to place modern definitions of religious toleration upon the shoulders of eighteenth-century thinkers. By doing so, historians invite anachronistic comparisons with the twenty-first century. Only by broadening the scope of Enlightenment studies beyond the traditional canon can one hope to grasp and investigate the intellectual dynamic of the Enlightenment.

This chapter is part of a research project directed by the authors, focusing on the major Swedish witch-hunt that took place in the county of Dalarna 1668-1671. In late seventeenth-century Sweden there were several mechanisms for the reintegration of convicted criminals into both the religious and secular community, with the church playing a key role. In the historiography of witchcraft it has been recognised that the background and the relationships between the involved parties in a witch-hunt were determining factors for how things would turn out. A notable example is the Countess Charlotta Taube who was made the very symbol of the Enlightenment struggle against superstitious witch-hunts. The heavily emphasised connection between superstition and the common people in the writings of the eighteenth-century Swedish elite did not reflect reality. Nevertheless, the folklorist-romantics of the late eighteenth century reinforced the stereotypical image of superstition as a 'popular' phenomenon.

The prevailing view in witchcraft studies is that male witches were rare exceptions to the rule and are less important and interesting, as historical subjects, than female witches. This chapter examines cases in which men were accused of witchcraft. The examples are drawn from several different regions, in order to test conventional generalisations about male witches. G. R. Quaife exemplifies scholars' difficulty in coming to grips with the fact of male witches. He actually suggests that the male witches were merely 'secondary targets as husbands or associates of a female witch'. Discounting all secondary targets would alter the statistical picture significantly. Quaife, however, avoids this result by constructing a double standard, which presupposes, by implication, that early modern Europeans did not 'mean it' when they accused men of being witches but were serious when they accused women. 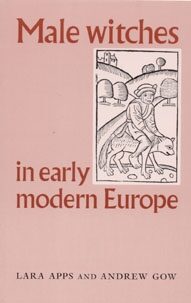 As was the case in many other places in early modern Europe, most of those who were accused of or who confessed to witchcraft or who were formally questioned as suspected witches in Rothenburg were female. This chapter provides new explanation for the gender-relatedness of witchcraft accusations through the prism of several seventeenth-century cases. The cases are analyzed in the light of ideas about how witches were conceptualized. These ideas suggest that women were more likely to be accused of and confess to being witches because witches were predominantly imagined by contemporaries as the evil inverse of the good housewife and mother; as women who poisoned and harmed others rather than nurturing and caring for them. The gender-bias which encouraged the citizens of Rothenburg and the peasants of its rural hinterland to imagine women as witches more readily than men was more marked at the elite level, where the influence of the city councilors, their legal advisors, and medical and theological experts combined to ensure that women accused of witchcraft were more likely to be formally prosecuted than their male counterparts and also to suffer more severely as a result of the rigors of the legal process.

The 'Black Man' genre means two things in the context of this chapter. First, stories about black magic and sacrificed pets were current as a collective discourse in the Ardoyne a good year before they begin to show up in the newspapers. Second, with ghost stories and the like, they are further evidence of an enchanted universe within which the Troubles were experienced and interpreted, and within which the black magic rumours circulated and found a degree of credence. There were a few articles on witchcraft and black magic in the Northern Ireland press in 1974. Black magic sacrifice was not the only kind of 'ritual killing' which was in the news in Northern Ireland at this time. Northern Ireland, like many other places, had long played host to muttered intimations of black magic and satanism, supposedly often practised by people in high places. ,.

One of the central issues of current research, especially of feminist research into early modern witchcraft, is the question of (female) agency. Agency theory posits that actors always have choices, no matter how restricted; 'agent-centred' morality proposes a novel twist on both traditional Kantian internalist categories and a useful political starting point for taking agents' conscious moral choices seriously. This chapter addresses the problems of both male and female witches' agency and selfhood. It applies questions regarding agency and resistance to cases involving men as well as to those involving women. In her much-reviewed and highly original collection Oedipus and the Devil: Witchcraft, Sexuality and Religion in Early Modern Europe, Lyndal Roper approached the topic of witchcraft confessions and their recantation from a psychoanalytic perspective. In Regina Bartholome's case, Roper suggested, Oedipal tensions and self-destructive tendencies combined to produce a dramatic confession to witchcraft and Devil-worship.

‘When will the burning start here?’
Open Access (free)
The Catholic challenge during the Thirty Years’ War
Alison Rowlands

The Thirty Years' War had started in 1618, and the late 1620s were years of ascendancy for the Catholic Habsburg Emperor, Ferdinand, and the Catholic League, the coalition of Catholic allies under the leadership of Duke Maximilian of Bavaria. This chapter analyses two trials from 1627 and 1629 to illustrate the ways in which they were shaped by the events of the Thirty Years' War and particularly by Catholic challenges to the city council's authority. Thirteen-year-old Margaretha Hörber's narrative of witchcraft and the manner in which the Rothenburg council handled it proved to be firmly embedded in, and expressive of, this wider context of religious conflict, in which a beleaguered Lutheranism appeared to be fighting for its survival against the resurgent forces of counterreformation Catholicism. The arrest of Margaretha by the council on 18 May can certainly only be understood in the context of a long-standing and extremely acrimonious battle to defend its judicial and political power in Gebsattel, a battle which had acquired an additional religious edge in the spring of 1627.

The best source for the study of Victorian witchcraft is newspapers. This chapter first discusses the power of narrative in detail. It then looks at two instances of alleged witchcraft, both of which attracted much notoriety in their day. A great deal of attention has been paid to the development in this period of the detective novel, particularly to the work of Poe, Dickens and Collins. The chapter begins with witch-cutting of Jane Ward in Stratford-on-Avon in the late 1860s. False-pretences charges in 'witchcraft trials' were against cunning-folk, always after they had accepted cash or payment-in-kind for their services, and usually after they had failed to achieve what they had promised. The tale of how a cunning-man called James Tunnicliff duped the newly-married Thomas and Elizabeth Charlesworth is complex, and the chapter provides a context for the forensic narrative. In both, those stories were countered in court by forensic stories.

This chapter discusses the extent and nature of witchcraft accusations in nineteenth- and twentieth-century France, and provides a general survey of the published work on the subject for an English audience. The only way of maintaining popular participation was to accommodate folk beliefs, involve people in the manifestation of the supernatural, and promote the practical application of religion. Both historical and ethnographic sources provide ample evidence that people can think in terms of witchcraft without being devoutly religious. In France the paysan under any economic definition ceased to exist by the 1960s, but as a cultural construct it remains a strong, symbolic reality to this day. For Arnold Van Gennep popular beliefs regarding the supernatural were living aspects of current culture, albeit a 'traditional' one at odds with modernity, and to record and measure them required a subtle and systematic method of oral interviewing.