In the 1880s, Alexander Graham Bell feared that deaf people’s intermarriage might lead to a deaf race. In the early 2000s, geneticist Walter Nance feared, on the contrary, that genetic technology might be genocidal for Deaf culture. These two figures mark the beginning and the end point of this cultural history of hereditary deafness research. In the century between, scientists made immense progress in identifying the genetic mechanisms underlying the inheritance of deafness. They uncovered that there were not only one or two responsible genes, but hundreds of different forms and syndromes. Yet there is a twist in this simple story of progress. What it means to carry one of the genes for deafness, and what should be done about it, differed and differs greatly. What has influenced these perceptions during the past century and what is at stake in researching genetic deafness? How, during the past century, have ideas about disability, difference, and citizenship changed, where did eugenics end, and, perhaps, neo-eugenics begin, and what do genes mean for our identity?

The first specialized psychiatric and genetic counselling services for deaf people, offered partially in sign language, were established at the New York State Psychiatric Institute in the late 1950s. They were part of a larger mental health care project for deaf people, led by psychiatric geneticist Franz Kallmann. The project was a collaboration with local deaf communities that makes visible a surprising confluence of eugenic traditions and minority movements, science, and activism. It was a turning point in the treatment and perception of deafness in the US, redefining it as a ‘stress-inducing’ psychological condition, and the deaf as a neglected social minority. Tying together the history of psychiatry, psychology, and genetics, this chapter shows how Kallmann and his co-workers reframed older eugenic paradigms in the language of 1960s health and civil rights activism, reframing family and genetic counselling as a health service to which deaf people were entitled. 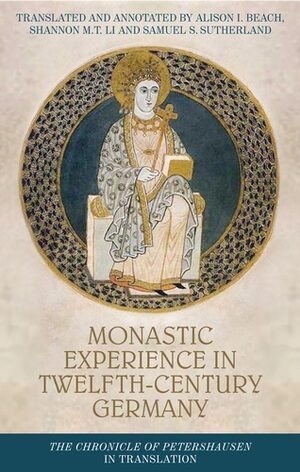 The twelfth-century Chronicle of Petershausen, composed over the course of more than thirty years, opens a rare window on the life-world of a medieval monastery as it struggles to grow and survive within tumultuous spiritual and temporal landscapes.
From its founding by St. Gebhard II of Constance as a proprietary episcopal monastery in 992 through the aftermath of the great fire that ravaged the community in 1159 and beyond, Petershausen encountered both external attacks and internal disruption and division. Across the pages of the chronicle, supra-regional clashes between emperors and popes play out at the most local level. Monks struggle against the influence of overreaching bishops. Reformers arrive and introduce new and unfamiliar customs. Tensions erupt into violence within the community. Advocates attack. Miracles, visions, and relics link the living and the dead. Through it all the anonymous chronicler struggles to find meaning amid conflict and chaos and forge connections to a distant past. Along the way, this monk enlivens his narrative with countless colorful anecdotes – sometimes amusing, sometimes disturbing – creating a history for the monastery with its own unique voice.
Intended for specialists and students alike, this volume presents the first translation into English of this fascinating text, which offers a unique glimpse into the lived experience of medieval monasticism and its interactions with the society around it.

Usher syndrome – congenital deafness and progressive vision loss – is often portrayed as one of the most tragic disabilities imaginable. This notion certainly drove psychologist McCayVernon, who in the late 1960s initiated a campaign to raise awareness with the goal of the eventual eugenic eradication via early screening, counselling, and, if necessary, ‘therapeutic’ abortion. Over the course of the 1970s and 1980s, the definition of Usher syndrome changed, not least because of the input and experiences of people living with it. In the 1960s, professionals defined it as a severe psycho-neurological disorder that caused psychiatric and emotional disturbances alongside the hearing and vision loss. Encounters with individuals with Usher syndrome who lived independently and were successful professionals challenged this paternalistic definition. Patient advocates shifted attention from eugenic prevention to improving quality of life, yet also used genetic motives to argue for their identity and worth. By the 1980s, both advocates and professionals focused on the emotional impact of living with deaf-blindness for the affected individuals and their families.

The Chronicle opens with a prologue that is stylistically and thematically distinct from the rest of the text, and which may originally have been written as an independent treatise by the same author. In it, the chronicler uses biblical exegesis to trace the apostolic origins of the various aspects of monastic practice. The author then recounts the origins of other monastic and ecclesiastical professions – regular canons, bishops, clerics, holy virgins, solitaries, inclusi, pilgrims, and beggars – concluding that each agrees on one faith.

in Monastic life in twelfth-century Germany

The sciences of deafness
Abstract only
Deaf people as objects of research, reform, and eugenics, 1900–1940
Marion Andrea Schmidt

Deaf people have long been the objects of religious salvation, of philanthropy, and educational reform. By the early twentieth century, science and medicine claimed to turn deaf people into productive, rational citizens. Eugenics, too, was part of these progressive reforms. Schools became the centres where these scientific, moral, and educational claims about normalizing deaf people came together, and no school embodied these ideals better than the Clarke School for the Deaf in Northampton, Massachusetts. Founded in 1867 as the first permanent oralist school in the US, it established, in 1928, a research department with divisions for psychological, audiological, and heredity research, all working towards the scientific management of deafness. Yet collaborating with scientists from other institutions, the school also had to engage with approaches to deafness that did not align with its own.

In 1984, the Gallaudet Genetic Services Center (GSC) opened its doors, offering ASL-based and Deaf culture-specific genetic counselling and evaluation. It was made possible through federal funding to remove barriers to genetic services for ethnocultural minorities. The three hearing geneticists who drove the GSC’s foundation – Walter Nance, Joann Boughman, and Kathleen Shaver Arnos – considered genetic research a collaborative enterprise with Deaf communities, creating, for example, ASL signs for genetic concepts. Combining non-directive with culturally sensitive counselling, they promoted genetics not as a means for preventing deafness, but as a way to gain self-knowledge. Acknowledging deafness as a normal, even desirable trait, the GSC helped prepare the notion of genetic awareness as an integral part of one’s identity and a tool of empowerment for Deaf activism.

Translation of the Relics of St. Gebhard
Abstract only
Alison I. Beach, Shannon M.T. Li and Samuel S. Sutherland

An account of the Translation of the relics of St. Gebhard describes in detail the festivities surrounding the canonization of the monastery’s founder and the consecration of the newly renovated church and chapels.

in Monastic life in twelfth-century Germany

This chapter examines the mind-sets that frame twentieth- and early twenty-first-century United Kingdom social policy. These thought processes continue to marginalise deaf people from opportunities for meaningful employment and can be traced to their roots in the Poor Law legislation for England and Wales of 1834. The concept of ‘deserving and undeserving poor’ that underpinned the Poor Law placed deaf people in a legally ambivalent situation that has never adequately been resolved, and so they came to be regarded as ‘deserving’ almost by default because of their inability to hear. Although this legislation was finally abolished upon the creation of a welfare state in 1948, its ethos continues to practically exclude deaf and disabled people from the workplace by emphasising what it is assumed an individual cannot do, rather than on what (s)he can do.