This chapter shows how hegemonic attempts to define and solidify Australian national identity have always been contested and unstable. It elucidates how Australian national conflict has been linked with tangible conflicts over land, injustice and power, and how they have been closely intertwined with anxieties about insecurity. The chapter argues that such a politics forestalls the achievement of a holistic and non-militarized security based upon the emancipation of human beings. It also argues that the operation of security politics gravely distorts Australian defence and foreign policy and directly endangers both others and the state's own citizens. The chapter suggests a range of ways in which the practices and conceptualizations of security, identity and sovereignty in Australia need to be refigured if Australian defence and security policy is to be rebalanced. It is important to place systems and processes of representation in security affairs, and politics more generally, under critical scrutiny.

On November 8, 2001, just days before the federal election, Prime Minister John Howard was making the customary leader's appearance at the National Press Club. This chapter exposes dilemmas about the role of intelligence in democratic politics, one that was to become a major issue in Howard's next term of government as he committed Australia to go to war against Iraq. Intelligence agencies had done much to dispel the suspicions and criticisms occasioned by the partisan conflicts in which they had sometimes been embroiled during the Cold War, and especially during the long period of conservative rule. As the long countdown to the Iraq war began, Australia's intelligence apparatus seemed to be stable and harmonious, and more professional than it had ever been, but there were undercurrents of tension.

In this chapter Islamism is viewed as a variety of religious fundamentalism. The religion of Islam must be differentiated from the many varieties of Islamism as political ideology. In view of the developments in the post-bipolar Middle East, there is a clear connection between fundamentalism and security. Domestic and regional stability in the southern Mediterranean is needed, and the Islamization of politics is viewed as a security threat to peace in this region. Samuel Huntington recognizes what is termed the 'cultural turn' in seeing how cultures and civilizations play an increasingly important role in international politics. The major problem with his approach is that he believes civilizations can engage in world political conflicts. The chapter focuses on the attitudes of Islamic fundamentalists vis-a-vis the Arab-Israeli peace process. It examines the impact of the working hypothesis on the negative connection between peace and Islamism in the case of the Maghreb.

This chapter examines the concept of security through discursive contestation at the leadership level in a critical Middle Eastern case, that of Israel. It examines the specific discourses of security employed by opposing political groups during key periods in the history of the Arab-Israeli conflict. The chapter argues that failure to resolve the fundamental dispute among Palestinians and Israelis stems directly from the victory during the 1950s of the more hard-line militaristic Israeli approach towards state security and development. It discusses the shortcomings of a systemic or structural realist approach to the question of the Palestinian-Israeli peace. The chapter establishes a historical basis for the dispute between Israeli militarism and moderation with a focus on the critical period of the early to mid-1950s. It assesses the contemporary implications of the doctrines of militarism and moderation with regard to the Palestinian-Israeli conflict during the 1990s.

The architects of the Black Sea Economic Cooperation (BSEC) identified economic development as the main pillar of regional security and promoted three objectives: cooperation rather than conflict, regionalism as a step towards global integration, and avoidance of new divisions in Europe. Declarations and treaties adopted by the BSEC during its ten years of existence are important tools in identifying and assessing mechanisms for dealing with security issues within the BSEC framework. In 1996, the Assembly of the Western European Union (WEU) issued a call for security to be incorporated into the existing subregional cooperation structures, including the BSEC. The internal weakness of most BSEC countries in transition and their vulnerability to outside pressures, as well as their inadequate or absent integration into new security frameworks, have intensified the overall climate of regional insecurity.

This chapter charts the basis and evolution of a decision that is set to define the ten-year premiership of Tony Blair; the decision was to go to war in Iraq. It focuses on the institutional context within which the decision was taken, paying particular attention to the ongoing presidentialization of British politics and consequent downgrading of Cabinet as a decisionmaking body. This process created the political space in which the decision could be taken. James Piffner, in the chapter, discussed that the US political leaders ultimately misled the public by exaggerating the threat posed by Iraq. The Blair inner sanctum had to sell the war to the British public after determining British's support to the US in removing Saddam Hussein. The focal point of this effort would be the Downing Street's September 2002 publication of a dossier based on intelligence material detailing the threat from Iraq's weapons of mass destruction.

This chapter aims at studying John Burton's human needs theory and locating his version of theory in a wider tradition of thinking. The assumptive basis of needs thinking as it relates to the analysis of behaviour and motives is examined in the chapter in order to lay the foundations for an understanding of the rationale of Burton's workshop theory. The human needs narrative of Burton postulates a version of the alienation thesis. The thesis consists of the idea of human needs as something original which cannot be suppressed. Human needs thinking often includes a form of biological determinism. The notion of determinism as it relates to the explanation of human behaviour is complex. Since determinism is the thesis that every event has a cause, belief in determinism often embraces the claim that all human behaviour is causally explicable. 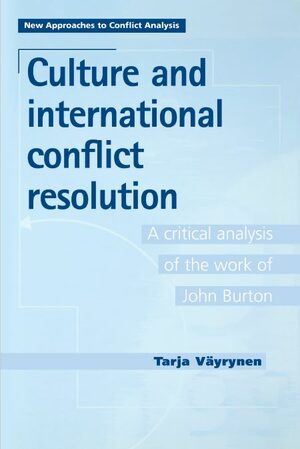