This chapter begins by showing how the First World War improved the technology used in amplified telephony while simultaneously creating the conditions of mass deafening that made such technology necessary. It then argues that the telephone was used as an arbitrator of normal hearing and that the data used to create apparently normal hearing levels in the British interwar telephone system featured a ‘disability data gap’. This disability data gap was embedded in the British Post Office’s ‘artificial ear’, which represented ideal hearing (eight normal men with good hearing) as normal, to the detriment of those at the outer edges of a more representative average curve. Subsequently, those with less than perfect hearing agitated to demand the Post Office supply telephones that could be used by the majority of the population. The Post Office responded by creating its ‘telephone service for the deaf’, and the subsequent user appropriation and modification of this service vividly demonstrates the fluid categorisation of deafness that the telephone enabled. This history reveals how aspirational users employed a variety of strategies to ensure equitable access to telephony and how users with hearing loss created modified devices so that they could access telephony.

This chapter shows how the standardisation of sound was perfected and pursued in the interwar years as the ‘telephone as audiometer’ was embraced as an objective tool to define noise limits and the thresholds of normal hearing. In this way, the audiometer was elevated as a tool for testing hearing loss and prescribing hearing aids because it provided an objective numerical inscription, which could be used to guard against malingering and to negotiate compensation claims for hearing loss. Simultaneously, the ‘telephone as hearing aid’ exploded into the interwar medical market as hearing aid moderation and prescription were complicated by conflicts over categorisation, the status of hearing aids as medical devices and the question of which institutional bodies were responsible for the ‘problem of hearing loss’. Finally, this chapter ends with analysis of the ending of the Post Office’s amplified telephone service and argues that failure to consider user input or the reality of hearing aid usage from the perspective of the ‘deaf subscriber’ led to failure to provide an NHS adjunct for telephony.

Chapter 2 first discusses the wider philosophical implications of the book’s historical research to argue that the naturalist position on disease and disability is undermined by consideration of how statistical normalcy is technologically constructed. Second, it argues that this presents a problem of ‘mechanical’ epistemic injustice and explores this concept in relation to the ways in which measurement tools have been prioritised as authoritative and trusted ahead of individual testimony about personal experiences of health. Sustained attention is given to the problem of using group averages and reference classes in relation to normalcy and the ways in which ‘correcting’ for attributes like sex, class and race (or not) impacts on the measurement of normalcy. Finally, research from disability studies and the field of hedonic psychology is explored to argue that the measurement of disability is far more complex than a medical model of disability suggests.

This chapter outlines the ways in which our understanding of normal health can shift according to measurement technologies and explains the historiographical and conceptual background to this research. Moving through an outline of each chapter of the book, this introduction argues that our desire for single numbers and quantifiable data has shaped our understanding of the normal as dichotomous to the abnormal. The idea of normalcy is historicised and explained in the context of an era that was overwhelmingly concerned with degeneration and disability and ways of quantifying these deviant attributes through either direct or indirect measurements. The idea that numerical measurable data has privileged (and powerful) epistemological significance is highlighted through explication of the comparison between hearing and breathing, which is characterised by extreme diversity in personal experience which eludes fixed representation. The impetus behind the reduction of these multidimensional sensorial qualities stemmed from powerful bureaucratic forces for whom numerical classification was especially important, namely, the British Post Office and the Medical Research Council, and this chapter details the importance of these two bodies to British society during the interwar years and explains the drive behind their standardisation of normalcy.

Moving on from Chapter 6’s analysis of the difficulties surrounding classification of individual respiratory disability, this chapter explores how those so classified lived with this disability in the interwar period. By discussing technologies designed to enable breathing, this chapter highlights user modification of respiratory technologies and particularly highlights the case of the Bragg–Paul pulsator. The pulsator was originally designed in collaboration between a user and an engineer. Yet the embodied knowledge that was used to create this mechanical respirator was not accepted by the medical establishment. Physiotherapists disputed its viability and questioned the health benefits of the principles by which the pulsator operated, and this dispute led to the MRC directing an intervention to decide on a ‘standard’ breathing machine. However, these inimitable breathing machines proved to be remarkably difficult to standardise.

This chapter explores how the drive to translate breathlessness into quantifiable, scalable measures was influenced by historical interactions between medical expertise, industrial interests and compensation schemes. Considering these interactions highlights the related processes by which we have variously decided which groups count as medically distinguishable populations. Tracking the changing normal values used in spirometry values through the prism of two groups considered to be significant categories at different points in the twentieth century – women and miners – highlights the interactions between race, class and gender in spirometry. Considering the first group, women, demonstrates how difference in lung function between men and women was established, and the varying extent to which such differences were attributed to biological or societal causes. Similarly, analysing the efforts to define normal lung function for miners highlights the way in which abnormal lung function was attributed to the essential nature of the miner’s body, and underlines the impact of politics on the classification of respiratory disability. In this way, Chapter 5 uses historical case studies to argue that the selection of healthy subjects to create a standard of normalcy worked as a powerful way to manipulate the categorisation of disability as well as to obscure its true causes.

This chapter examines the French station and later colonial centre in the Indian Ocean trade region of Pondichéry. It gives an account of the city’s building history since its founding by a director of the East India Company, a short interludium of Dutch occupation, and the city’s flourishing under the governor-general Dupleix. Compared to the Antilles, the colonial architecture in Pondichéry was much more impressive and lavishly styled. The main structure in the city, Fort Louis, was, however, a construction site over many years until it achieved its intended ideal form in the Vauban fashion. The chief engineers had a large Indian workforce at their disposal that had to be paid to the customs of the land. Therefore expertise for masonry, brickworks, carpentry, etc. was available through the mediation of local contractors who organized the logistics, supply for materials, and most of the work at the construction site. Under Dupleix the most elaborate French architectures emerged, like the government palace, that were supposed to awe the Indian princes of the neighbouring kingdoms. The intention for forming an imperial standing by visual and material means was directed not to Europe, but to the subcontinent itself with its complicated system of states that was loosely bound together by the rule of the Mughal. Thus Dupleix’s ambition to empire was to be recognized by the Indian emperor and not by another European power. 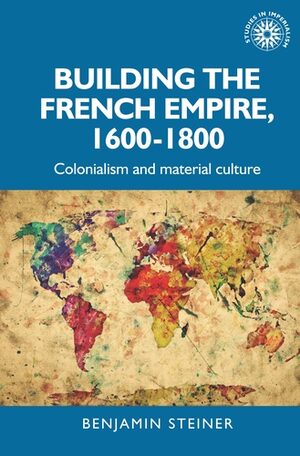 This study explores the shared history of the French empire from a perspective of material culture in order to re-evaluate the participation of colonial, Creole, and indigenous agency in the construction of imperial spaces. The decentred approach to a global history of the French colonial realm allows a new understanding of power relations in different locales. Traditional binary models that assume the centralization of imperial power and control in an imperial centre often overlook the variegated nature of agency in the empire. In a selection of case studies in the Caribbean, Canada, Africa, and India, several building projects show the mixed group of planners, experts, and workers, the composite nature of building materials, and elements of different ‘glocal’ styles that give the empire its concrete manifestation. Thus the study proposes to view the French overseas empire in the early modern period not as a consequence or an outgrowth of Eurocentric state building, but rather as the result of a globally interconnected process of empire building.