Much anarchist and social ecologist writing argues for a degree of connectedness between other animal life and insensate bodies and materials on earth. In this vein, a new strand of nonhierarchical, vitalist political ontology, termed ‘new materialism’, takes mutualism and ethics more radically beyond the human. This chapter looks briefly at prehistories, within vitalist traditions, before turning to recent contributions to this dynamic field such as by Barad, Bennett, Grosz and in the anthology by Coole and Frost, New Materialisms: Ontology, Agency, and Politics (2010) among many others. New materialism seeks to take politics and philosophy to new levels of nonhierarchical awareness. This chapter argues for its potential (along with its variants) within the history of art, given new materialism’s apparent productive encounters within other humanities disciplines. The perhaps surprising conclusion for art history, as a discipline dominated by hierarchies, markets, monetisation and value systems, is that this is an intellectual trajectory that art historians should positively engage with and make their own contributions.

Part I: Towards an ecocritical art history
Abstract only
Andrew Patrizio

This chapter presents the avant-garde and subversive advertising design that operated on the margins of the newly emerged advertising industry. This was created for the new consumer culture of the 1960s alongside the new national style that was created for the 1964 Olympic Games and the 1970 Expo. This era, following the economic miracle, was known as the first golden age of graphic design and advertising in postwar Japan. The subversive graphic design is presented by means of two innovative advertising campaigns: the Fuji-Xerox campaign and the Parco campaign. These campaigns were created during the 1970s by two major art directors, Suzuki Hachirō and Ishioka Eiko, who transformed advertising design by blurring the boundaries between commercial and subversive styles. Their campaigns encapsulated the new critical spirit (including ecological, feminist, and anti-institutional concerns) at the heart of the period's mainstream consumer culture. These campaigns are presented in the context of subversive, countercultural Japanese graphic design as well as of the mainstream commercial and national advertising posters of the same era. 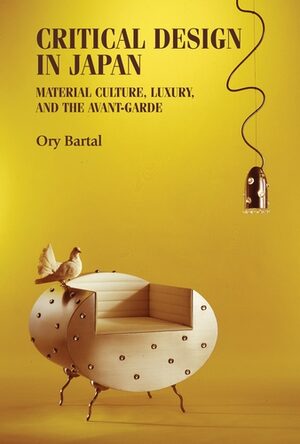 This book tells the story of critical avant-garde design in Japan, which emerged during the tumultuous 1960s and continues to inspire contemporary designers today. The postwar avant-garde milieu gave rise to a ground-breaking popular visual language and garnered tremendous attention across the fields of product design, graphic design, fashion design, and architecture. It created conceptually challenging artefacts and made decisions that radically altered the course of Japanese design history. The avant-garde works that were created in the sphere of popular culture communicated a form of visual and material protest inspired by the ideologies and critical theories of the 1960s and 1970s, which were concerned with feminism, body politics, the politics of identity, and, later, ecological, anti-consumerist, and anti-institutional critiques as well as an emphasis on otherness. These designers were driven by passion, anger, and a desire to critique and change society and introduce the avant-garde political thinking of the 1960s and subversive visual and material practices into the heart of consumer culture starting from the 1980s. Their creations thus combined two seemingly contradictory concepts: luxury and the avant-garde. By presenting the new arena of avant-garde Japanese design that is operating as a critical sociopolitical agent and involves an encounter between popular culture, postmodern aesthetics, critical theory, and new economic rules, the book carries the common discourse on Japanese design beyond aesthetic concerns and especially beyond ‘beautiful’ or ‘sublime’, revealing the radical aesthetic of the designed objects that forms an interface leading to critical social protest.

This chapter focuses on the digital revolution and virtual reality, which overtook material reality in the 1990s. These developments offered new critical possibilities while challenging the organisation of visual perception, the structure of information, and the traditional sociopolitical role of objects and opening up a new range of possibilities between virtual representations and actual artefacts. This new popular culture cast a critical gaze at traditional economic perceptions by producing open design platforms that enabled participation in a collaborative economy as an alternative to capitalistic competition and rivalry. At the same time, it blurred oppositional categories such as human/machine or nature/culture – vestiges of the pre-digital age that had been perceived as unshakeable truths. This chapter centres on contemporary designers such as Wakita Akira and Sputniko! and design studios such as Nosigner and Takram Design Engineering, which are concerned with post-human design, open design, IoT (Internet of Things), and human–machine interfaces. These new technologies and their realisation by means of digital images – and sometimes also in material form – offer their users new insights and perspectives, doing away with traditional categories of thought and constructing a new reality.

This chapter discusses avant-garde Japanese fashion and the countercultural use of the body as a critical site of resistance in Japan. Focusing on the young Japanese designers who turned against a homogeneous, collectivist culture to create various subcultures by using style as a social statement in the 1970s, this chapter presents the popular kawaii culture as a colourful and fluffy protest against the humdrum, everyday life of the corporate employees (sararīman) working for Japanese conglomerates, who represented the values and norms of Japanese society in the 1970s. Alongside this protest, this chapter also presents the deconstructive fashion of the Comme des Garçons company and its designer, Rei Kawakubo. As of the 1970s, Kawakubo engaged with the politics of the body and identity and countered the aesthetic discourse and repressive values imposed by the fashion world through dress patterns and fashion photographs that presented women with an imaginary 'ideal' body. These two oppositional fashion statements challenged different power hierarchies (in Japanese society and in the fashion world), while addressing issues of class and gender.

Hironen and the representation of the other
Abstract only
Ory Bartal

This chapter focuses on the furniture and jewellery designs created by the Hironen Studio from 1987 to 1995. The symbolic objects produced in this studio belong to the design-art genre and present the discourse concerning difference and otherness through a decadent visual style focused on extreme individualism, narcissism, and personal identity. This discourse is engaged by means of a transgressive visual strategy based on two aesthetic sources: the camp aesthetic stemming from Queer theory and its formulation of postmodern otherness and the Japanese ero-guro-nansensu (erotic-grotesque-nonsense) genre, which emerged in bourgeois popular culture during different periods in Japanese history, and similarly combined unconventional forms of behaviour. The visual combination of these aesthetic genres in contemporary design amounted to a visual protest against hegemonic taste as a representative of class, gender, and power.