This chapter argues that participatory art practices need to be understood in conjunction with the anxieties and contradictions that accompany them. The analysis of participatory art and the conceptualization of participation in and through art thereby become intertwined in complex ways. The interpretation of participatory practices through the register of the gestural is to rethink participation while accommodating its contradictions and disquietudes. In mapping out the concept, gesture recurs as a foil to four interconnected realms: language, the body, the image and the act. The gestures of language are inseparable from imagery, they bring forth images, hint at grasping language through a different, non-discursive dimension. At the same time gestures are themselves dynamized images, they introduce observable movement into an image, with a beginning and an end. In its mediation between the body and language, the chapter identifies the notion of the gesture aptly captures the paradoxes of participatory art.

Audience participation consists of the deceptively simple act of around twenty people pitching tents on the site, spending the night there and leaving the next morning after sharing breakfast together. Participation is a central concept to Nomad City Passage, which explores lived experiences of urban spaces, asking how the sites of a city are experienced by its inhabitants. The curatorial concept of the documentation in 'Normality' emphasizes participation in spatial terms. 'Normality' is a collage of images and ambient sounds from the camping sites in Linz. Access to such documents, given the absence of an opportunity to participate directly in the event, provides a rich archive for analysing various aspects of people's participation in the artwork and the artwork's participation in public life. The participation is presented as the positively connoted response to two interconnected problems: to the absence of autonomous artistic value and to the commercialization of modern art.

This chapter investigates the assumptions around impact in relation to participatory art, as well as the critical and methodological challenges of thinking them together. It focuses on a number of debates in theatre and performance scholarship pertaining to assessing and evaluating impact in relation to the question of participation. The chapter offers a number of points of orientation and aspects to take into consideration when undertaking a study of theatre's impact. Two characteristics of Teatro Siluetas are pertinent in relation to the question of impact and participation: the choice of the organizational form of a collective and the foregrounding of a lesbian subjectivity in the artistic practice. The chapter describes the problem of aggregation that is the relationship between participatory art and its social impact in terms of a spectrum of various levels of intensity of participation.

This chapter suggests that the concept of the 'gesture' is more accurate than the 'act', as the concerned moments are not legible in terms of intentional, full-fledged signifying acts, but as minor, small movements in the larger frame of theatrical action. Sherry Arnstein argues that purely tokenistic forms of citizen participation can at worst lead to non-participation. The gestures of unsolicited participation in the workshop seek to remain illegible to the established discursive procedures of participatory theatre, they resist formalization without necessarily opposing it, and can thus often not even be recognized as resistant. The chapter includes various domains of the arts, wherein participation has become a debated topic, such as community-based or applied theatre and performance, immersive performance and the visual arts. The gestures of participation in the workshop can be regarded as both internal and external to the rules of spoken language.

The idea for the performance project Where We Are Not (2009) by the Amsterdam-based Lebanese artist Lina Issa emerged out of the artist's own legal situation at the time. Audience participation consists at the simplest level in being or becoming aware that one is invited to be a witness to or a part of a conversation and an intimately shared experience between Issa and Cordero. Tracy Davis argues that the condition for theatricality as an artistic and social phenomenon is the audience's awareness and consciousness of being spectators. The physical gestures are never only individual expressions, they are always also the performative montage of a social habitude, of the inequalities and the violence inherent to them. The word 'potentially' needs to be emphasized, for it would be fallacious to hastily conclude that the participatory gesture is a radical performative per se.

Beautiful disorder, exception to the rule
Abstract only
The development of a new design aesthetic
Anca I. Lasc

In the last chapter, the book returns to the work of architects. It argues that architects’ engagement with popular journals helped shape new interior decorating styles by examining the projects undertaken by architect Alexandre Sandier and sponsored by the popular journal the Revue Illustrée. The chapter ultimately claims that imagination and theming played a most important role in the development of the profession of interior designer as well as in the formulation of new decorative styles such as Art Nouveau. These two developments are inextricably linked and cannot be understood in separation from each other. 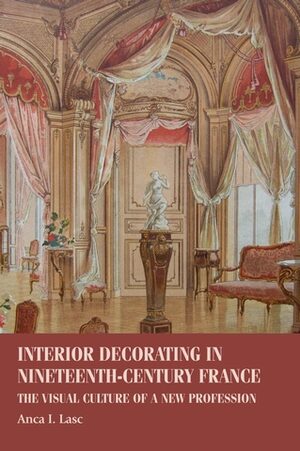 The collector as taste advisor and interior decorator
Abstract only
Popular advice manuals and the orchestration of the private interior
Anca I. Lasc

This chapter examines influential collecting and taste manuals from the second half of the nineteenth century dedicated to both a male, respectively a female, audience. After providing a brief history of collecting and its development in post-revolutionary France, the chapter explains how the visual and critical discourses about the proper appearance of the modern, private interior and about the arrangement of objects displayed therein informed the development of a new historicist, themed aesthetic. This new aesthetic required a mastermind to supervise the organization of each interior decorating ensemble within the upper as well as the middle-class private home - increasingly more decorated in the aftermath of the Industrial and Consumer Revolutions - paving the way to the work of the later interior decorators at the end of the nineteenth and the beginning of the twentieth century.