Clear All
Download Citations
Page:123456789101112 ...
The forms of news from France in Shakespeare’s 3 Henry VI
Abstract only
Alan Stewart

of the great English hero. This sets the scene for the contrasted portrayal that is to come of his son and heir, Henry VI. But, as this chapter argues, Shakespeare is also playing with the forms with which this telescoping is achieved: the forms of news. All three messengers come with news from France. Shakespeare’s play thus echoes a current preoccupation of the 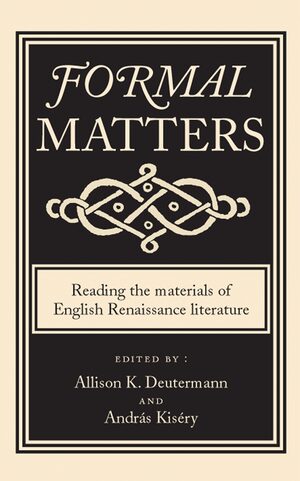 observe that the age of child marriage is rising ( Koski et al. , 2017 ). Different to South Asia, where most of the research on child marriage has occurred, girls in some African countries have greater autonomy in choosing a spouse ( Petroni et al. , 2017 ). Humanitarian agencies have frequently framed CEFM as a form of gender-based violence (GBV) ( Plan International, 2018 : 1; CARE, 2014 ), and this framework has also been presented by others ( Belhorma, 2016 ). The practice of child marriage is influenced by multiple drivers which vary depending on the context

In this essay the author proposes that a detailed study of the context of the production and reception of the spate of best-selling marine natural history books published in the 1850s provides an important and neglected opportunity for understanding Victorian conceptions of evolutionary,and anthropological monstrosity. Whilst the ape has received a good deal of attention as the primary evolutionary icon, through which the Victorians dreamed their nightmares of descent, the marine invertebrate has been much neglected. However, represented by evolutionists as the first life forms on the planet from which all higher life forms had evolved, marine invertebrates were an important alternative evolutionary ancestor, and were used to express ideas about the `nature of class, race and masculinity‘.