maintenance debt from civil debt thereby meaning that any father found to be non-compliant with a child maintenance order could be found to be in contempt of court and sent to prison. The decline of patriarchal power The decline of patriarchal power was posited by Kennedy (2001) as a phenomenon in Ireland that was rooted in the 1920s and the 1930s. Kennedy’s account revealed four overarching historical influences on the decline of parental power in Ireland. First, was the influence of British marriage and family law and in particular the Guardianship of Infants Acts (1927

The NSPCC in Ireland, 1889–1921
Abstract only
Sarah-Anne Buckley

this construction. Although the Poor Law had restricted and questioned parental power (particularly that of fathers) from the 1830s, the NSPCC deliberately advanced legislative reforms that increasingly involved the State in the private lives of families. As the quotation opening this chapter elucidates, unlike ‘other societies’, the Society was focused on reforming parents through the threat of prosecution, and as charity work took on a greater class consciousness and class fear in the nineteenth century, the children of the poor became a primary focus. An analysis 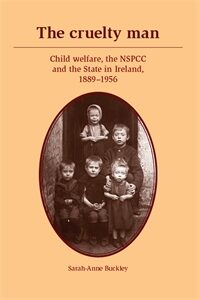