Santiago Waria: Pueblo Grande de Wigka is a site-specific theatre play that was realised in the context of interdisciplinary research in which history, anthropology and urban cultural studies were articulated, eventually developing a montage about Mapuche life in the city of Santiago. The term ‘site-specific’ is used in the arts for works that are created in , for and through a specific place, most often the same in which they are then exhibited. During the creative process, both 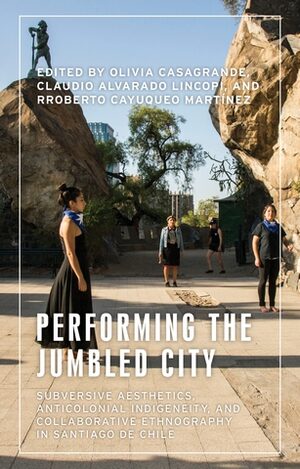 not realise her dream. However, this did not limit her creative expression. Throughout her eighty-seven years of life, in countless notebooks, many of which are now lost, her ideas about the world surrounding her were recorded in the form of poems and song lyrics she composed with a guitar. Many years later, having raised four children, my grandparents, along with part of the family, moved to the Metropolitan Region, settling in the municipality of San Bernardo. I was born in the 1980s, in the middle

the hands of those he sought to subdue. Nonetheless, it was probably for this precise reason that Dania’s performance was dramatisation and enactment, and at the same time embodiment, of the ties that the colonial history still holds, revealing that unresolved tension that has been called ‘decolonisation’; should we think of and act on a ‘decolonisation’ as a going back to the pre-colonial, or is it rather about finding new and creative ways of carrying the weight of 500-year-old open wounds

origins. As later represented by the artwork El Jardín , the Quinta Normal, shaping collective memories, also represents a claim for place-making in displacement, a creative appropriation within processes of belonging and becoming. It is where the art exhibition was displayed, and later, during the development of Santiago Waria , the park was chosen by Roberto as the very place where the play began and the related journey through the city started. As we will see in what follows, 5 the site was the

generated creative processes. We are artists, actors, students, historians, teachers, anthropologists, and ramblers of the urban night. We mixed knowledge and feelings to the point that ‘interdisciplinarity’ felt narrow, uninspiring, and nothing like what we were doing. Perhaps it makes much more sense for us to speak of ‘indisciplinarity’, both as a gesture of disobedience and as a practice of disciplinary combination without pure and expected ends. ‘Indiscipline’ was our methodological drive, which is

direction of site-specific methods, art, and performance. 4 The collaborative – and hence open – nature of the research and the ability and wholehearted commitment of the participants to creatively intervene in it, as well as my own willingness to rethink methodologies and forms of representation, allowed the project to be transformed into a much more complex and richer collective space, as we will see in what follows. The sort of ‘open laboratory’ that MapsUrbe represented during the two years I spent in

, the study of non-Western and folk music has required the adoption of systems of sound recording in order to delimit an object of study in its materiality. This created a proximity with recording technologies that remains central and opened the door for further developments in the field of multimedia. The foundational experience of Béla Bartók at the beginning of the twentieth century shows a synergy between his studies of Hungarian folk music and his activity as composer; more specifically, the latter stimulated his research and became a way to make a creative use

are sometimes limited spatially and temporarily to the performance, that is, they are acoustic communities (Truax 1984 : 65–66) or communities of (sonic) practice that come together around a given event and might separate after its conclusion. In this introduction we unpack how we interpret the connection between sound and the formation of local identities, starting with some clarifications on these two key terms. Subsequently, we trace the main steps in the entanglements of ethnographic research, creative practice and cultural heritage in Basilicata, providing

occasions. (Paula González Seguel) It is not easy to address the experience of collective and creative work within MapsUrbe. The Collective was conceived as an exercise in the discovery of Mapuche memories and identities in the city of Santiago, based on David Aniñir’s work, Mapurbe . However, on a personal level, it also implied an exercise in mnemonic openness, as well as academic and sentimental socialisation. This piece seeks to reflect on the meanings entailed