pacifism’.7 While Peckover allied herself with the Peace Society more closely than most other female peace activists of this period, it is important to stress that on a number of significant issues she disagreed with its aims and methods. She was also critical of the expansionist British imperialism that was being practiced across the globe, and she publicly disagreed with the Peace Society on the question of how to protest against the second Anglo-Boer war. Although Peckover’s personal focus was strongly influenced by Christianity, she supported all other associations

war experiences. British nurse writer Kate Luard, a veteran of the Second Anglo-Boer War (1899–1902) began the First World War as a sister with the QAIMNS Reserve and rose to the position of Head Sister to one of the most significant British advanced casualty clearing stations. American Alice Fitzgerald, a prominent member of the nursing profession in the USA, joined the QAIMNS Reserve as a sister in 1916, but left to take up a senior role with the American Red Cross following the USA’s entry into the war. The quintessential British nurse: Kate Luard Katherine

new phenomenon:  the Second Anglo-Boer War (1899–1902) and the Russo-Japanese War (1904–5) had featured the use of machine guns and the deployment of heavy artillery. What was new, and (for most) unexpected, was the extent of the carnage. The unsuccessful assaults that characterised the first three-and-a-half years of the First World War led to massive numbers of casualties, sometimes numbering tens of thousands in one day. Typically, the wounded would arrive at field hospitals as ‘rushes’  – more than could be coped with by even the best-staffed hospital with the

training since the developments of schools of nursing in the nineteenth century. Furthermore, nurses saw this work as involving skilled decision making, rather than being a simple domestic task.78 In the absence of drug therapies, it was often the only method of supporting recovery.79 As Charlotte Dale argues, during the Second Anglo-­Boer War (1899–1902) the provision of ‘food, fluids and palliatives’80 was the only treatment regimen for typhoid.81 Although by the Second World War, TAB (typhoid-­paratyphoid A and B) vaccination against typhoid was given to all those on 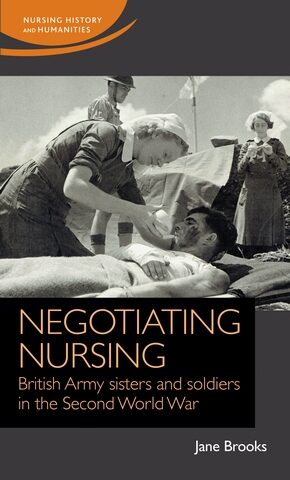 disease outbreak, as a prism through which to examine historical questions, invisible or overlooked processes can be revealed. Dale also uses a crisis, in her case the Second Anglo-Boer War (1899–1902), to question the motivation, control and organisation of military nursing at the end of the nineteenth century. Her study reveals a crisis within military nursing, performed at the time by a mix of trained and lay nurses, as the army struggled to meet the demand for professional nursing in the first major conflict to involve nurses in large numbers since the Crimea. The