5 • Taming worldly emotions and appetites In his Poetics, Aristotle (383–322 BC) stated that passions were an intrinsically human trait and could not be ignored; he c­ onsidered that, although some passions could be harmful, others might be acceptable in a good and virtuous life. Yet such was not the general view in seventeenth-century Europe. Early modern authors were more receptive to the Stoicism of Cicero (106–43 BC) and Seneca (c. 1–45) and to their much harsher judgement of pathos as perturbation, giving emotions a much more negative and disruptive 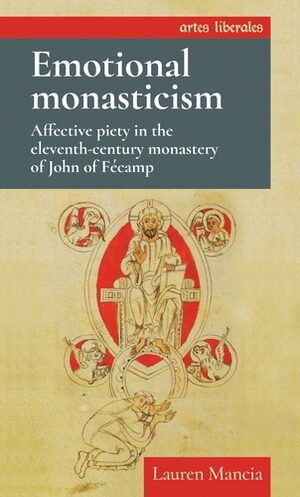 Scholars of the Middle Ages have long taught that highly emotional Christian devotion, often called ‘affective piety’, originated in Europe after the twelfth century, and was primarily practised by late medieval communities of mendicants, lay people, and women. As the first study of affective piety in an eleventh-century monastic context, this book revises our understanding of affective spirituality’s origins, characteristics, and uses in medieval Christianity.
Emotional monasticism: Affective piety at the eleventh-century monastery of John of Fécamp traces the early monastic history of affective devotion through the life and works of the earliest-known writer of emotional prayers, John of Fécamp, abbot of the Norman monastery of Fécamp from 1028 to 1078. The book examines John’s major work, the Confessio theologica; John’s early influences and educational background in Ravenna and Dijon; the emotion-filled devotional programme of Fécamp’s liturgical, manuscript, and intellectual culture, and its relation to the monastery’s efforts at reform; the cultivation of affective principles in the monastery’s work beyond the monastery’s walls; and John’s later medieval legacy at Fécamp, throughout Normandy, and beyond. Emotional monasticism will appeal to scholars of monasticism, of the history of emotion, and of medieval Christianity. The book exposes the early medieval monastic roots of later medieval affective piety, re-examines the importance of John of Fécamp’s prayers for the first time since his work was discovered, casts a new light on the devotional life of monks in medieval Europe before the twelfth century, and redefines how we should understand the history of Christianity.

Between 1598 and 1800, an estimated 3, 271 Catholic women left England to enter convents on the Continent. This study focuses more particularly upon those who became Benedictines in the seventeenth century, choosing exile in order to pursue their vocation for an enclosed life. Through the study of a wide variety of original manuscripts, including chronicles, death notices, clerical instructions, texts of spiritual guidance, but also the nuns’ own collections of notes, this book highlights the tensions between the contemplative ideal and the nuns’ personal experiences. Its first four chapters adopt a traditional historical approach to illustrate the tensions between theory and practice in the ideal of being dead to the world. They offer a prosopographical study of Benedictine convents in exile, and show how those houses were both cut-off and enclosed yet very much in touch with the religious and political developments at home. The next fur chapters propose a different point of entry into the history of nuns, with a study of emotions and the senses in the cloister, delving into the textual analysis of the nuns’ personal and communal documents to explore aspect of a lived spirituality, when the body, which so often hindered the spirit, at times enabled spiritual experience.

flag, practitioners’ own understandings of these intuitive abilities were grounded in the Generals of the Five Directions, who, under the command of the Emperor of the Dark Heavens, gathered the information required, the abacus providing a form of intercommunication between Tua Ya Pek and these spirit armies. In contrast to the purely physical senses, thirst is an emotion, emotion being defined as ‘a thought accompanied by a physiological reaction’ (Prinz, 2004 ; Schachter & Singer, 1962 ), and, during our discussion, Tua Ya Pek ‘the

-floor balcony after revisiting the party area below, and was amazed by the array of emotions shown towards Di Ya Pek by hundreds of people here: some kneeling down for blessings, others presenting him with gifts and drinking toasts, and many treating him ‘as if’ a film idol or pop star and collecting his autograph on their personal possessions which he signed with his thumb print. The overriding emotions I saw were adoration, devotion, respect, admiration and happiness, and these were reciprocal, not just within this community, but on reflection, between devotees and deities

between memorial and intercession. The wish to light a candle, it seems, overrode any theological considerations. Diana was personified in song as ‘a candle in the wind’, though this song was actually written about Marilyn Monroe and adapted for the occasion. A guttering candle represented a fragile life. If candles today can have such significance, and lighting them can be a means of expressing emotion, then much more so in the Middle Ages where the effect of burning them in dark buildings, and through the night, must have been all the more impressive. That candles

is done artistically and extravagantly. He is generous to his men; which means, among other things, having frequent feasts and celebrating their community by drinking with them. He has obligations to his men and to his people; his role is to protect them from their enemies. These values are above all seen as expressions of masculinity. The life of a good ascetic Christian is almost diametrically opposed. The ascetic rejects bloodshed, and even those emotions that lead to bloodshed, particularly anger. The ascetic rejects his family, and if he

spirits who, given that it was Seventh Month, were there in abundance. As the incense smouldered, the three Tua Ya Pek stood up and showered us with joss money and while it was still falling, Di Ya Pek, with his back to the tablet bestowed blessings on each of us. As a final benediction, channelling Underworld efficacy through their flags, the three Tua Ya Pek rested them on each participant’s head as with mixed emotions we knelt there in silence to receive their blessings. Our last ritual act was individually igniting the joss money which had

The New England way reconsidered
Abstract only
An exploration of church polity and the governance of the region’s churches
Francis J. Bremer

profession of faith offered by someone whose understanding and emotions had been enlightened by the spirit and offered by someone who was not of the elect, and that difference was discernible by the godly. 158 The New England way reconsidered In limiting membership to those judged by their peers as likely to be of the elect, those New England colonists were asserting congregational principles. There were, however, some communities that took a different path. In 1635 Peter Hobart organised the church at Hingham, Massachusetts, along presbyterian lines with virtually all

6 • Divine love, an emotional panacea? Seventeenth-century English Benedictines, like all their Sisters and Brothers in Catholic Orders, were exhorted to make every effort to tame their worldly emotions. Their entire focus should be on Christ. Any bond of worldly friendship, though it might feel precious (especially within the confines of the cloister), was a distraction from spiritual pursuits. Even when they focused upon their spiritual quest, religious men and women were prey to human emotions which they saw as negative. When they went through times of doubt