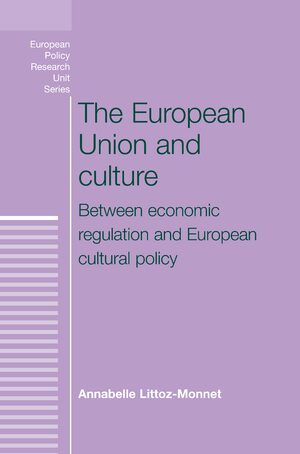 Cultural policy as a contested area
Abstract only
Annabelle Littoz-Monnet

The trajectory of Communitarisation, the process by which European level policies are developed and the sector's governance takes place in Brussels, varies significantly across policy sectors. European institutions have extensively intervened in the realm of audio-visual, book, copyright and cultural heritage matters, to name only those sectors where EU intervention has been the most substantial. What pertains to the field of ‘cultural policy’ often reflects political choices made by national governments. EU-level intervention in the cultural sector has essentially initiated the liberalisation of cultural industries' markets.

This chapter sheds light on the nature of the two different ‘conceptions’ of culture that were held by competing stakeholders in the decision-making process. Culture is the field ‘par excellence’ where policy preferences are not only determined by institutional, political and economic interests, but also by policy ideas. The chapter shows how policy ideas had an impact on the selection of policy models available in the cultural sector at the national level, thus acting as the very shapers of policy actors' preferences, and the extent to which policy ideas were also acting as a weapon in actors' interest maximising strategies.

This chapter sheds light on the tensions between distinct levels of governance in the course of the Communitarisation process of cultural policies. On the one hand, European institutions, and in particular the ECJ and the Commission, have played a role in the development of a new policy space at the EU level. On the other hand, member states were careful to preserve their policy sovereignty in a policy sector considered as particularly sensitive. In the 1980s, the states whose legislative and policy traditions were at odds with the liberalisation policies developed by supranational structures attempted to develop their own initiatives that would take into account their favoured policy preferences. This chapter shows that despite states' intervention and following Treaty reforms, EU intervention remained dominated by the application of economic principles to the cultural sector.

This chapter focuses on the TWF Directive, which establishes the principle of free flow for television programmes within the EU and harmonisation of EU states' broadcasting legislation. It details the Communitarisation process of audio-visual policy as well as the negotiation phase at the EU level that led to the enacting of the TWF Directive in 1989 and its renewal in 1997. The discussion argues that the TWF project was a supranational initiative developed by the European Commission as part of the drive to realise the European Single Market in the 1980s. France, whose interventionist tradition is evidenced in the audio-visual sector, along with other dirigiste states, felt strongly threatened by the mode of intervention developed at the EU level and attempted to wrest back control of policy by attempting to change the way the policy problem was framed at the EU level.

This chapter focuses on the developing of EU-level policies in the field of book pricing from the 1980s until today. It details the impact of EU-level policies on national policies, looking more specifically at France, Germany, and the United Kingdom. As in the audio-visual sector, economic principles were applied to the policy sector; yet no EU-level legislative solution was agreed in order to regulate book trade at the EU level. The chapter argues that although the ECJ and the powerful ‘economic’ DGs of the European Commission were successful in imposing policy change in countries where dirigiste solutions were in place, most states did not feel that their own policy and legislative arrangements were under threat and thought that fixed price systems could best be preserved by respecting the subsidiarity principle.

This chapter covers the Communitarisation process of policies in the field of copyright since the late 1970s. Here, European intervention initially started with the application of economic principles to the policy sector and common solutions were adopted when certain EU governments felt the need to develop positive policies. Yet two stages can be distinguished in the process of policy formation, with an evolution of policy priorities towards increased economic liberalisation. The chapter argues that the alteration of the constellation of actors involved in the policy-making process had an evident influence on the selection of policy options. In the 1990s, the constellation of actors' interests was much less favourable to the dirigistes than in the 1980s. New powerful economic actors had entered the ‘game’ and the constellation of actors was more likely to force the drafting of a ‘political’ compromise.

This chapter summarises the core observations of the book and their meaning in reference to the broader current theoretical debates on Europeanisation, Communitarisation, and the European integration processes. It compares the conclusions of the book to those of similar studies in other policy sectors and concludes that the EU became an active regulator in the cultural sector as it did across a broad range of policy areas. European institutions' ‘creeping competence’ extends to new policy areas through the application of economic principles to new issues where no Treaty competence otherwise exists.