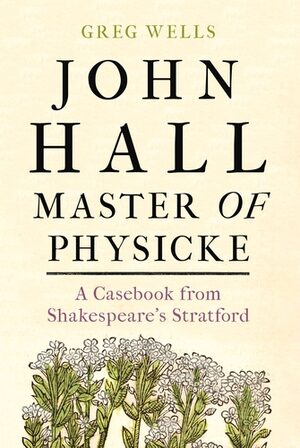 This is the first complete English translation of the medical casebook of John Hall, Shakespeare’s son-in-law. Greg Wells has produced a groundbreaking new study which significantly refocuses our attention on John Hall’s scholarship, as well as his compassion. Hall’s community of patients, their illnesses and his treatments are all authoritatively represented. But so too is Hall’s own library. In looking again at Hall’s Latin manuscript, Wells has been able to identify Hall’s many borrowings from other medical textbooks, thereby offering a unique insight into the intellectual climate of early seventeenth-century Stratford-upon-Avon. We have been relying on an abridged version of Hall’s casebook for over three centuries. Wells corrects and augments all previous studies, and in so doing retrieves the hitherto unnoticed conversations that Hall had with his patients, his prayers for their well-being, and thanksgivings for their recovery. John Hall emerges as a scholar physician who was immersed in the best thinking and practice of his age, who regularly consulted sixty books within his easy reach in order to treat all levels of society. Presented in association with The Shakespeare Birthplace Trust, this generously illustrated edition includes portraits of some of Hall’s patients, pictures of some of the houses he travelled to in order to cure them, of the herbs and plants he most frequently used, and of the kinds of medical equipment on which he relied.

This is the edition of John Hall’s medical casebook itself. This is the first complete English translation of the medical casebook of John Hall, Shakespeare’s son-in-law. Greg Wells has produced a groundbreaking new study which significantly refocuses our attention on Hall’s scholarship, as well as his compassion. Hall’s community of patients, their illnesses and his treatments are all authoritatively represented. But so too is Hall’s own library. In looking again at Hall’s Latin manuscript, Wells has been able to identify Hall’s many borrowings from other medical textbooks, thereby offering a unique insight into the intellectual climate of early seventeenth-century Stratford-upon-Avon.

This section presents an overview of what is known about Hall’s life, his background, education, family, his economic and social status, and religious affinities. His work and practice in Stratford-upon-Avon and the surrounding area are described (including, for example, the range in social status among his patients). A specially drawn map illustrates the catchment area of his work. Some brief examples of Hall’s cases and patients (including his conversations with them and his own reactions) will help to open up the casebook and whet the appetite for the reader to find out more. A critical analysis of the possible connections that might be made between Shakespeare’s own dramatisation of doctors (and medical language) and Hall’s practice concludes this part of the introduction. While gathering together and reshaping the basic biographical information about John Hall in relation to presenting the first, full, English translation and edition of his casebook, this section critiques, develops and moves beyond the mainstream literary and medical interest in Hall’s life and work. It has too often been the case that Hall’s medical practice has been considered in the shadow of Shakespeare’s dramatic portrayal of doctors. Wells here presents Hall afresh as a medical professional.

Wells’s edition marks the first time that Hall’s extensive borrowings from Latin medical textbooks for the production of his own casebook have been thoroughly and compellingly identified. This section describes the methodology adopted to recreate Hall’s library, and the books and authors themselves are clearly listed. This identification of Hall’s working library sheds completely new light on Hall and is significant in several contexts. It allows us to understand when, why and how Hall acquired his books. His use of them in relation to his patients and how he wrote up his medical cases shows us how Hall used his library: to identify therapies for his patients during his working life, and then to turn his initial case notes into a draft for his own Latin textbook. This section situates Hall’s working library in the context of other early modern medical libraries and describes Hall’s use of books over time. Tables provide a list of books in Hall’s library and show his most frequently used sources. Wells is the first to present Hall’s casebook in terms of the library on which it relies, so this whole section represents a highly original contribution to the field.

John Hall’s manuscript is the one record we have of his authentic voice. This section describes the manuscript and summarises its history. But what do we mean by ‘a casebook’? The term as used by historians covers works of mixed and fluid genres. Hall’s work differs from the majority of casebooks because it represents his draft towards a book he never finished. It shows that a casebook can have an internal structure related to the chronologies of its composition as well as to the cases from which it draws. Hall is not unique in his substantial borrowing from Latin texts, though he does represent an extreme and very rare example. His manuscript is especially valuable because it represents a work in progress, an early modern physician’s mind in the process of thinking about his patients, his conversations with them and his treatments. This first complete English translation presents a highly readable work, full of human interest, insight and compassion. This section of the introduction also outlines the themes of Hall’s casebook and shows how Hall interacted with his patients. This section represents original scholarship in its new understanding of Hall’s manuscript, his Latin, and what it represents in an historical context.

This section makes clear the compelling case for a full, English translation of Hall. Historians have too easily taken for granted that Cooke’s seventeenth-century translation was both accurate and complete. It is not. Cooke’s translation contains both errors and omissions. For example Cooke misattributes the cure of the Earl of Northampton (case 137) to the Oxford physician Dr Clayton, rather than to Hall himself. Cooke also turns Hall’s conversations with his patients into brisk, radically abridged summaries, and loses much of Hall’s personal views on his relationships with his patients. Until now, anyone wanting to study John Hall has had to rely on Cooke’s 1679 edition (on which Joan Lane’s 1996 edition is also based). Wells’s book does not contain Hall’s Latin text, but annotations to the English text make Hall’s Latin borrowings from his sources clear. Wells’s editorial principles with regard to Hall’s abbreviations, punctuation and handling of pharmaceutical Latin are succinctly described, as are the principles that directed Wells’s own English translation.