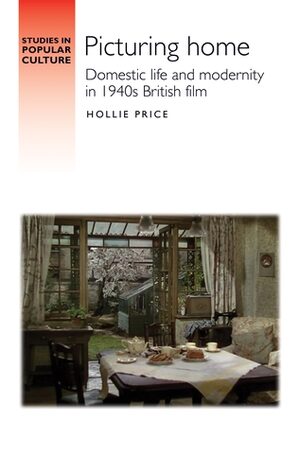 This book explores the depiction of domestic life in British films made and released during the Second World War and the immediate postwar years. It closely examines the modes of address used to picture home in a selection of feature films including Love on the Dole, It Always Rains on Sunday, This Happy Breed, The Captive Heart, Spring in Park Lane, The Glass Mountain, Brief Encounter and The Small Back Room. Exemplary of popular modes of address shaping onscreen homes in this period, these films encompass realist mappings of industrial working-class homes, domestic landscapes infused with pastoral imagery, dream palaces offering escape and uncanny homes characterised by interiority and introspection. Picturing home explores how such depictions of domestic life engaged with modes of address established during the interwar years. These modes featured in Picture Post magazine’s photo-essays, illustrations of peaceful domestic interiors in Ideal Home magazine, displays at the Daily Mail Ideal Home Exhibition, advertisements for modern furnishings and fittings, and in women’s magazine stories – all of which conveyed ideas of conservative, domestic and suburban culture and modernity. Through a close analysis of the films in question and of extra-cinematic culture surrounding the suburban home, this book offers a new reading of British films in the 1940s as reimagining interwar visions of modernity, and, as such, looking to the prewar past while also laying claim to the postwar future.

The introduction establishes the book’s focus on depictions of domestic life in 1940s feature films and their engagement with trends in prewar culture – with particular reference to The First of the Few (Leslie Howard, 1942). Across a number of disciplines, explorations of interwar middlebrow fiction and culture, interior design, women’s magazines, the domestic everyday and femininity, have highlighted a distinctive construction, and experience, of modernity: centred on the home, privileging connections to the past, and exemplified by suburbia. Structured in three sections, this introduction outlines the book’s re-contextualising of 1940s British films as part of this field of study and introduces its approach to exploring the relationship between the visual style of British 1940s films and their wider cultural context: it suggests how this research builds on studies of British cinema analysing the relationship between film aesthetics and extra-cinematic culture; it sets out the historical context for the development of ideas surrounding domestic life and modernity during the interwar years; and it introduces the four visual modes of address analysed in depth in the book’s chapters.

This chapter considers the construction of domestic life onscreen in terms of ideas concerning psychological wellbeing in the home. The interwar development of suburbia saw an increased interest in studies of the psyche: prominent among these was the diagnosis of ‘suburban neurosis’. At this time, melodramatic stories accompanied by dramatic illustrations of domestic life were published in women’s magazines such as Modern Woman, providing a popular way of addressing the psychological significance of home. Charting subjective experiences, these stories destabilised the concept of home as comfortable and constant; instead, they conveyed insecurity, instability and a desire for escape. Bringing together an exploration of women’s magazines in the interwar years with close analysis of two 1940s films, this chapter focuses on the private visions of housewife and mother Laura Jesson (Celia Johnson) in Brief Encounter, (David Lean, 1945) and backroom scientist Sammy Rice (David Farrar) in his London flat in The Small Back Room (Michael Powell and Emeric Pressburger, 1949). It contends that these two films re-imagined a mode of address balancing melodrama and modernism, which was used in the 1930s to interrogate the instabilities of the modern home, thus illuminating a different side to domestic life and its ‘’.

Tea-table politics, pastoral images, dream palaces and private visions of home in the 1940s films analysed throughout this book embodied a debt to an interwar culture in which picturing home was a means of conveying modern ideals of social reform, national identity, comfort and citizenship. In the selection of films featured, the recurring trope of crossing from exterior to domestic interior situates the homes onscreen in relation to industrial working-class townscapes, national landscapes, consumer daydreams, and feminine subjectivities: images of domestic life onscreen are constructed through processes of mapping, capturing, transforming and imagining. This conclusion brings together the depictions of domestic life examined throughout the book, exploring their relevance to the study of modernity in mid-twentieth-century Britain and suggesting their significance as nuanced, modern and dynamic portraits of home and society that both promised a return to the past and projected dreams of the future.

Pastoral images
Abstract only
Capturing ‘A Landscape from Within’
Hollie Price

This chapter explores the influence of rural imagery on the depiction of the home in 1940s films. With the interwar expansion of the suburbs, domestic life was promoted with an emphasis on idyllic, pastoral settings. The designs of new suburban homes presented a middle ground between a mythical, rural past and a transformed, modern future. Contemporary advertisements and aspirational home magazines such as Ideal Home, Homes and Gardens and My Home often framed domestic life in relation to rural landscapes. Through reference to this popular print culture – including magazines, furniture catalogues and colour books – this chapter extends current understanding of rural imagery in British film and culture by exploring two films that frame domestic life as a pastoral image. It focuses on This Happy Breed (David Lean, 1945), which constructs a family home in Clapham as a symbol of national consensus, and The Captive Heart (Basil Dearden, 1946), a postwar film set in the temporary homes and gardens of a prisoner of war camp. Focusing on colour and framing, the chapter re-contextualises the depiction of domestic life in these films with reference to interwar modes of address negotiating a rural past simultaneously with a vision of future homes and communities.

This chapter examines depictions of the industrial working-class home in British social realist film, focusing specifically on the recurring motif of the tea table. Focusing on Love on the Dole (John Baxter, 1941) and It Always Rains on Sunday (Robert Hamer, 1947), it expands on existing analysis of British realist aesthetics by contextualising the visual spectacle of the working-class home in these two films in relation to an earlier trend for social investigation in the interwar years. In the late 1930s, working-class homes were rigorously mapped – for instance, by Mass-Observation, by George Orwell in The Road to Wigan Pier and in Picture Post magazine, which showcased a new style of candid photography. Such images of domesticity professed a level of social realism, illuminating the realities of everyday life in the working-class home. This chapter examines constructions of ‘tea table politics’ onscreen in the 1940s through a close analysis of this wider offscreen culture of social investigation, focusing on Picture Post. In doing so, it explores how Love on the Dole and It Always Rains on Sunday map everyday domesticity in a middlebrow style that combines realism with more romanticised conceptions of the working-class home, projecting idealised notions of respectability, reform and community.

This chapter explores the home’s endowment with escapist qualities in two postwar films that demonstrate cinema’s debt to the consumer culture which developed around the suburban home during the interwar years. The late 1930s consumerist transformation of domestic life was notably influenced by Hollywood visions of domesticity and consumer culture, but also presented an indigenous form of consumerist escapism, tempered by values of tradition, restraint and Englishness. Building on existing research which considers the relationship between British film, domestic modernity and consumer culture, this chapter explores aspirational images of home in Spring in Park Lane, a light-hearted, part-musical romantic comedy set in the sprawling spaces of a grand London mansion, and The Glass Mountain (d. Henry Cass, 1949), which centres on the dreams of home and the romantic dalliances of a composer. It analyses how these films offer visions of domestic transformation by constructing a particular kind of spatial experience and by conveying aspirational images of glamorous, and yet profoundly stable, domestic stardom. In so doing, the chapter contends that these films re-imagine the kind of domestic transformation that was promised by interwar consumer culture, and which came to be repurposed in peacetime for audiences facing the possibilities offered by postwar reconstruction.