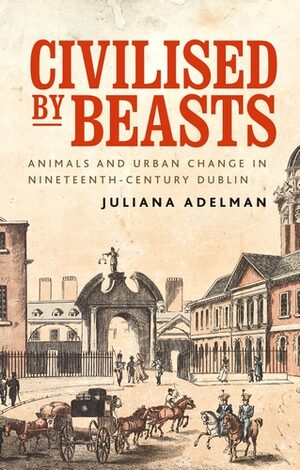 This book is a history of nineteenth-century Dublin through human–animal relationships. The book offers a unique perspective on ordinary life in the Irish metropolis during a century of significant change and reform. The book argues that the exploitation of animals formed a key component of urban change, from municipal reform to class formation to the expansion of public health and policing. The book uses a social history approach but draws on a range of new and underused sources including archives of the humane society and the Zoological Society, popular songs, visual ephemera and diaries. The book moves chronologically from 1830 to 1900 with each chapter focused on specific animals and their relationship to urban changes. The first chapter examines the impact of Catholic emancipation and rising Catholic nationalism on the Zoological Society and the humane movement. The second chapter looks at how the Great Famine drove reformers to try to clearly separate the urban poor from animals. The third chapter considers the impact of the expanding cattle trade on the geography, infrastructure and living conditions of the city. The fourth chapter looks at how middle-class ideas about the control of animals entered the legal code and changed where and how pigs and dogs were kept in the city. The fifth and final chapter compares ideas of the city as modern or declining and how contrasting visions were associated with particular animals. The book will interest anyone fascinated by the history of cities, the history of Dublin or the history of Ireland.

This chapter introduces the main argument of the book: that animals have been an important part of urban change during the nineteenth century. The chapter situates the book in the historical literature on human–animal relationships, on cities and on nineteenth-century Dublin. The chapter argues that recapturing animal presence in the city is an important means of writing a new history of ordinary life in Dublin and other cities. A synopsis of each chapter is also provided.

This chapter compares the fates of the Dublin Zoological Society and the Dublin Society for the Prevention of Cruelty to Animals (DSPCA) during the early nineteenth century. The chapter argues that the specific political and social context of Ireland in the aftermath of Catholic Emancipation and at the beginning of the campaign for Repeal of the Union shaped attitudes towards the exploitation of animals. In particular, the chapter shows that the DSPCA suffered from a lack of public interest because its daily activities involved the punishment of poor Catholics in a city increasingly politicised along religious lines. The Zoological Society, by contrast, developed widespread public support for the display of exotic animals as a project in popular education.

How to live on your pig
Abstract only
Improvement and the poor during the Great Famine, 1845–50
Juliana Adelman

The advent of the Great Famine had significant impacts on Dublin, especially in the areas of public health and municipal reform. This chapter shows how concerns about the relationship between the Irish poor and animals drove the expansion of public health initiatives and shaped debates around the provision of food relief. The chapter focuses on debates about the rearing of pigs in the urban environment, how to dispose of human and animal wastes and the proper components of soup to provide to the city’s hungry paupers.

This chapter considers the impact of an expanding appetite for beef in England and in Dublin on the economy, geography and health of the city. The chapter argues that the move towards expanded livestock farming in the aftermath of the Famine had a significant and lasting impact on the city of Dublin, just as it had on agriculture in the countryside. The chapter examines the increased regulation of slaughterhouses and meat production in the city and how this expressed municipal ambition to control and enhance the urban environment. The second part of the chapter focuses on the development of a new cattle market in the city and how this reflected the commitment of Dublin to serve the agricultural industries of rural Ireland into the future. The result of both of these changes was to entrench a certain type of cattle business within the urban landscape well into the future.

This chapter examines the expansion of policing as a form of implementing social changes through a comparison of dogs and pigs. The chapter looks first at the introduction of the dog fancy to Ireland and especially Dublin and considers how the new concept of the dog as a specially bred house pet contributed to the development of more stringent regulations, including a tax, on dogs in the city. The chapter compares the process of policing dogs with that of policing pigs, which were increasingly considered incompatible with city life. The chapter reveals that middle-class standards of pedigree and hygiene combined with policing efforts to have significant impacts on how the poor were allowed to keep animals.

This chapter asks how different types of animals came to be associated with different views of Dublin, and different perspectives on whether the city had succeeded or failed by the close of the nineteenth century. The first part of the chapter considers the contribution of horses and horse transportation to the creation of the prosperous suburbs and their links to the city. The chapter argues that the linkages created by new forms of horse-powered transport were central to creating the perception that these suburbs were part of the city and that the city was improving. The second part of the chapter considers the problems of cattle in the city and their links with diseases of concern, especially tuberculosis. The chapter argues that while the problem of slaughterhouses continued to be debated, public health reformers focused on dairy cattle and milk products as the source of transmissible diseases after the advent of germ theory.

This chapter draws the book to a close by considering how animals were viewed in Dublin during the twentieth century. The chapter reiterates the book’s argument that human responses to different groups and types of urban animals played an important role in shaping modern urban life including laws, policing, geography, transportation and culture. A comparison of the fates of the Dublin Cattle Market and the Zoological Gardens suggests the degree to which we have accepted particular roles for animals in the city (as pets and spectacle) while concealing other roles (as food or work animals). The chapter also considers the issue of how historians can include animals in their work and what kind of agency we might say that they have.