We live in an age of democracy. Very few people challenge the virtues of ‘government by the people’, yet, politicians and commentators are fond of decrying the ‘crisis of democracy’. How do these views square up? This book provides the answer by surveying the philosophical history of democracy and its critics and by analysing empirical data about citizen participation in Britain and other developed democracies. In addition to analysis of major political thinkers such as Plato, Machiavelli and J.S. Mill, it analyses how modern technology has influenced democracy. Among the issues discussed in the book are why people vote and what determines their decisions. When do citizens get involved in riots and demonstrations? Are spin doctors and designer politics a threat to democracy? Do the mass-media influence our political behaviour? 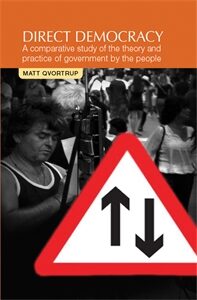 Drawing on the insights of political theory as well as empirical and comparative government, the book provides an up-to-date overview of the theories and practice of referendums and initiatives around the world. The book discusses if we ought to hold more referendums, and how the processes of direct democracy have been used – and occasionally abused -around the world.

This book analyses talking, voting and fighting among citizens, in an attempt to understand why and when ordinary people engage in these activities or combinations of them. Political activity defies traditional boundaries. Sometimes political activists use arguments, at other times they vote—and occasionally they resort to violence; in other words: talking, voting and fighting. This chapter notes that the politics of participation involves all three forms. We endorse talking and voting because they are activities based on peaceful and reasoned arguments, and we condemn violence because we know that might is not right.

This chapter develops an account of what is required for the study of political phenomena. Using a largely qualitative method, drawing on writers like C. Wright Mills, Richard Fenno, Clifford Geertz and Hannah Arendt, it argues that political participation cannot be understood from an objective perspective only, and that one needs to study the phenomenon from the inside. An understanding of citizen politics requires that we adopt the perspective of the citizens in question and take seriously their grievances and concerns. It aims to combine the various perspectives of what has been called the ‘sociological imagination’.

This chapter turns to historical debates about citizen politics. Throughout the history of civilised society, citizen politics has been the exception rather than the norm. Most societies through the ages have been based not on citizen engagement but on more or less despotic rule. Why, then, should citizens be involved in politics and, indeed, take a direct part in the process of governing? Beginning with the Greek philosophers Plato and Aristotle, the chapter presents a general account of the defence of citizen politics provided by Machiavelli and Marsilius of Padua, Rousseau and Mill, but also an introduction to the elitist critics of democracy, e.g. José Ortega y Gasset and the federalists.

An empirical approach to citizen politics
Abstract only
Matt Qvortrup

This chapter considers the ‘illegal’—but not necessarily illegitimate—aspects of citizen politics, including terrorism. It considers a number of different forms of political engagement, all of which share the feature of being unrelated to representative democracy. Citizen government and involvement include a broad range of activities, legal as well as illegal, new as well as old. The discussion turns to the mechanisms through which the citizenry can be consulted other than the ballot box.

This chapter focuses on novel means of political engagement that have emerged in recent years, including teledemocracy and the internet, deliberative democracy, political parties' use of designer politics, and political marketing. It argues that the increased use of political consultants can in some cases strengthen democratic legitimacy by ensuring that citizens' preferences are acknowledged in policies.