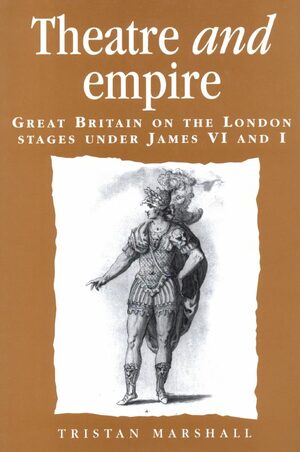 Theatre and empire
Abstract only
Great Britain on the London stages under James VI and I
Series: Politics, Culture and Society in Early Modern Britain
Author: Tristan Marshall

This book looks at the interrelationship between nationalism and theatre in the Jacobean period. It also looks at the creation of a British identity brought about by the accession of King James VI of Scotland to the English throne in 1603. The most significant political legacy of James's national project was the creation of an emphatically British identity among the settlers from both England and Scotland who planted Ulster. A series of plays in London's theatres was staging the lives of a group of earlier British rulers. The theatre of the Jacobean period does not rest on Shakespeare alone. What emerges in the study of the London stages in this period is that his work fits into a wider framework of dramatic material discoursing on not just the Union, but on issues of war, religion and overseas exploration. Under James VI and I, the discourse on empire changed to meet the new expansion overseas, and also the practicality of a Scottish king whose person fulfilled the criteria of King of 'Great Britain' in a way that Elizabeth never could. For James VI and I, Shakespeare's play was a celebration of the British imperium that seemed secure in the figures of Henry, Prince of Wales, Prince Charles and the Princess Elizabeth. The repertoire of the theatre companies suggests that in terms of public opinion there was a great deal of consensus regarding the direction of foreign policy.

This introduction presents an overview of the key concepts discussed in this book. The book looks at the interrelationship between nationalism and theatre in the Jacobean period. More specifically, it looks at the creation of a British identity brought about by the accession of King James VI of Scotland to the English throne in 1603. The most significant political legacy of James's national project was the creation of an emphatically British identity among the settlers from both England and Scotland who planted Ulster. These settlers took on the name of Britons as their common currency in the face of native Irish and old English Catholicism. The Shakespeare who wrote in the Jacobean age wrote very different plays from his Elizabethan canon, plays which like those of his contemporaries would make the matter of Britain a far higher priority in terms of subject material.

The early Jacobean period saw the coalescing of sixteenth-century ideas of empire into a new form. This transition period had a momentum of its own, derived from the accession of a Scottish monarch whose uniting of the kingdoms resulted in a spate of popular drama discoursing on the ancient entity of Great Britain. The idea of the British imperium was one which strongly asserted the power and right of the English crown to control of its own affairs, both spiritual and temporal, within its own boundaries. And it was this understanding of empire which therefore formed the basis of imperial thought by the late sixteenth century. The period from 1610 to 1615 saw a flood of writing concentrating scholarly attention on Great Britain as a physical entity. Writers keen to celebrate James's accession drew upon a corpus of images with which to associate the king.

1603–10: ‘Britaine is now, Britaine was of yore’
Abstract only
Tristan Marshall

The concentration of a group of playwrights on Britain's connections with ancient Rome powerfully challenges the notion that interest in Britain faded out of the public consciousness at the same time as concern for Union. James VI and I was a lot more successful in stimulating interest in Great Britain outside Parliament than he ever was inside, suggesting that the readers should be wary of continually looking to Parliament in the authors' efforts to understand Jacobean politics. In considering two of Shakespeare's most popular Jacobean works, King Lear and Macbeth of 1605-06, it will become apparent that Lear's positioning within a 'British canon' is easier to justify than the Scottish play's. The two works by Shakespeare, as well as the anonymous Nobody and Some-body, belong to a period in which discussion of Union permeated the political language and spawned a shoal of literature and sermons.

1611–13: ‘The true Panthæon of Great Britaine’
Abstract only
Tristan Marshall

The role played by James's eldest son, Prince Henry, in the inculcation of an imperial mentality was critical. The period from 1611 to 1613 saw the apotheoses of theatrical material relating to the new Britain, coinciding as it did with Henry's investiture as Prince of Wales and the marriage of the Princess Elizabeth to the Elector Palatine. In looking at the plays performed during the greatest period of the prince's public life, this chapter suggests that Henry himself played a far more controlling role than has hitherto been appreciated. It also suggests that the militant ideas he espoused were derived less from the minds of a few than from the wider spectrum of imperial visions and aspirations of the British peoples. The masques present a totally different picture of Henry's aspirations. The Masque of Truth is certainly the most militant of the masques.

In the period following the death of Prince Henry in 1612 and the departure of Frederick and Elizabeth in 1613 there was a palpable sense of hiatus for those advocating a strong British Protestantism. The Hector of Germany strongly suggests that Henry Stuart lived on in the hopes surrounding the Elector Palatine, following his marriage to Princess Elizabeth, hopes which indeed were given new impetus by his election in 1618. But in 1614 the German connection meant that Protestantism was no longer an isolated force in European diplomacy. Dekker and Massinger's The Virgin Martyr comments on the dangers of courting Spain with a stem warning about the treatment Protestants in Britain could expect at the hands of Catholic Spain. By the time of The Virgin Martyr and of Hengist, King of Kent, reference to Rome has become synonymous with the Roman church.

Afterword
Abstract only
‘Neuer a trve Britain amongst you?’
Tristan Marshall

Through his Forth Feasting, William Drummond helps people to understand the Great Britain. In a recent magazine debate, a few commentators made highly pertinent observations regarding the subject of Britain and Britishness. The British union state was a political expedient, but its 1707 creation must not allow one to overlook the imaginative force of that state brought into existence under James VI and I. And the idea that Britain is a political term rather than an ethnic one might hold water now but it certainly did not four hundred years ago, especially in the absence of a British political discourse in the early modern period. The depiction of Britain on the Caroline stage differed fundamentally in that Prince Charles's vision of both Great Britain and chivalry were linked to his particular notion of love's chivalry, the knightly mores of his personal romantic notions of warrior kingship.