her family, but as intelligent and responsible citizens, women also had a duty to society. It was the Union’s aim, therefore, to encourage its members to get involved in local and national affairs and to give Christian women a voice in public life. The concept of Christian citizenship was also central to the work of the CWL. One of the League’s primary objectives was ‘to help women to become good citizens through being good Catholics … [women have] an important role in safeguarding the laws of God and the rights of the family’.75 In 1918, when the franchise was

in April 1932, when members of the League and the Union of Catholic Mothers attended a meeting of birth control campaigners in Bolton. The meeting had been called to urge the local authority to sanction the provision of information at welfare clinics. However, following the objections raised by the Catholic women, the local council rejected the proposal.108 The CWL also disrupted the 1936 Conference of the NBCA held in Birmingham. During a discussion on the work of voluntary birth control clinics, a League member who was in the audience attempted to have a

years, as well as to resist the new colonising and civilising power of the reforming Church. Here, lay Catholic women took centre stage. By retaining connections to vernacular traditions and the landscape, they managed the passages that were central to their lives, well-being, and autonomy. They resisted change and modernisation. Over time, Catholic women also blurred the lines between official Catholicism and popular vernacular beliefs, helping to create a religious syncretism that persisted in rural Ireland into the first decades of the twentieth century. For

gospel’. 17 In the United States, historian Mary Henold has identified a rich and robust history of Catholic women and women religious embracing the feminist movement. 18 American historian Elizabeth Kolmer noted ‘the feminist movement, in varying degrees, has been a common experience for the Catholic sisters’. 19 North American women explicitly identified themselves as feminists; some, like Sisters Mary Joel Read and Mary Austen Doherty, sat on the board of the National Organisation for Women. 20 In Britain, Catholic women participated in wider social movements

Victorian women with numerous examples of the prescribed nineteenth-century ideal of womanly virtue. In this literature, marriage was the pinnacle of true womanhood; single life was deemed unattractive and a personal failure.4 There were, of course, some exceptions to this opinion. Mrs William Grey, lecturing on ‘Old Maids’ in 1875, protested against this widespread view of a single woman as a ‘social failure, a social superfluity, or a social laughing-stock’ and lectured on the utility of ‘old maids’.5 Catholic women possessed a third alternative: religious life.6 This

continuities that marked Catholic women’s lives across a century. While motherhood remained contested throughout the entire era, here, again, the years following the ‘devotional revolution’ proved a key time of change; by the latter decades of the nineteenth century, modern notions of motherhood solidified as nationalism expanded. With nation-building and independence in the 1920s and 1930s, women’s reproductive capacities and roles as mothers were politicised as never before, coming to the centre of public attention and coming increasingly under the purview of legislation

a picture of the Sacred Heart, which was permanently lit by a glowing red lamp. Our font was made from an old jam jar and a twig of box hedging, and Mammy would sprinkle holy water around the house with the twig every night to protect us from evil spirits.3 As these examples illustrate, women – grandmothers, sisters, daughters, and mothers – oversaw the material culture of the early twentieth-century Irish Catholic household. By creating holy households dominated by a devotional material culture, Irish Catholic women asserted their religious authority within the

University of Ireland (RUI), small numbers of women had taken examinations through Protestant and Catholic women’s colleges. The University Act had specified that the RUI was solely an examining body and that it was up to 50 Kelly.indb 50 7/12/2012 11:27:19 AM Becoming a medical student 51 students to study at any college they chose, or privately, in order to prepare for its examinations. The first nine Irish female students who graduated through the RUI in 1884 had attended classes at Alexandra College, McIntosh and Tinkler, a ‘grind’ establishment (i.e. a school 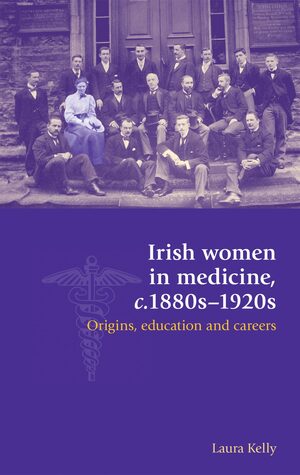 church continued to function as a focal point for group identity. However, institutions like schools and the Irish Chaplaincy could also serve to exclude those who did not conform to certain expectations of morality and behaviour. Charlotte Wildman’s chapter also considers how the Catholic Church could be a focal point for women’s Irish identity in Britain. Wildman examines the experience of Irish-Catholic women in interwar Liverpool, arguing that, contrary to much scholarship, their identity was shaped by modernity. During the late 1920s and early 1930s, the Catholic