was no accident that the late nineteenth-century imperial extension was matched by a massive expansion in metropolitan and provincial museums in Britain. The foundation stones of the Manchester Museum were laid as Gladstone’s government hurled the nation into the ‘scramble for Africa’. Many historical studies accordingly focus on this early colonial activity, and much of the literature is concerned with the nineteenth century. And yet the geographical and administrative peak of the British Empire was in the early twentieth century, which was reflected in the 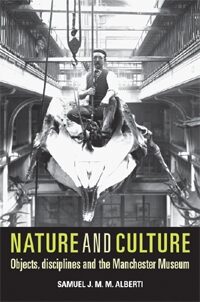 conflict between colonists of the British Empire and the Aboriginal people. For others the gun case is a testimony to the courage and bravery of the pioneers and explorers. Do the Bible, prayer books and christening gown show the steadfast faith of Christians in a new land? Or are they evidence of the way that Christians ignored the spirituality of Aboriginal people?18 As this label indicates, much of the critique was carried by words and direct mode of address which had, at times, a rather didactic tone. As Margaret Anderson, the inaugural director of the Migration

Practice
Abstract only
Technique and the lives of objects in the collection
Samuel J.M.M. Alberti

valuable for such routine avenues. One precious insect collection was flown by British Empire Airways from Vienna to Northolt.12 Most objects arrived safely at the Museum, there to be subject to a complex set of processes to stabilise and secure them, that is, ‘conservation’ – the umbrella term that according to the Manchester Museum’s Keeper of Conservation encompassed ‘both the preservation and enhancement of information embodied in the chemical, physical and biological make-up of the object’.13 We have already seen how different intellectual approaches clustered

insistence regarding the reform of asylums in the second decade of the nineteenth century. The influence of local and national government can be clearly seen in the portable material culture of the asylum, including the documentary evidence. Governance and the state in public asylums were particularly visible in Ireland, where the administration of asylums was, from the outset, an expression of (colonial) power. There were aspects of governance in nineteenth-century Ireland which shared commonalities with colonies in the British Empire. However, as part of the Union