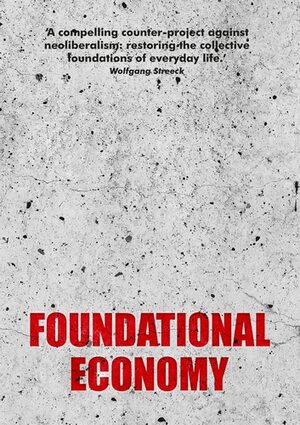 Renewing the foundational
Abstract only
The Foundation Economy Collective

‘universal basic’ has become a new catch phrase: thus, we have not just experiments in universal basic Renewing the foundational 121 income in Finland and the Netherlands but also, as discussed below, proposals in the UK for universal basic infrastructure and universal basic services. And new thinking is also seeping into regional policy. Politically, Wales provides an interesting test case because here, for the first time anywhere in Europe, foundational language is being incorporated into official policy. Two cheers for these developments. They are welcome progressive

financial stability. These important societal functions have been outsourced to economic experts, with the bank employing two hundred economists in total.21 There have been similar developments elsewhere in the world. Independent CBs are present in the US, Japan, Australia and most starkly in Europe in the form of the European Central Bank, which is completely unaccountable to the democratic wishes of particular Eurozone countries. In an incredible turn of events in Italy in 2011, a coalition of technocrats headed by the economist Mario Monti Econocracy  13 was sworn