contemporary European history as well as for the modern histories of Latin America, Asia, and Africa. Curiously, the same cannot be said for the Middle Ages. Our own tumultuous 1960s and 1970s stimulated new studies of the English Uprising of 1381 and the Revolt of the Ciompi, but only two monographs have thus far compared medieval revolt across national boundaries: Mollat and Wolff, Ongles bleus [translated 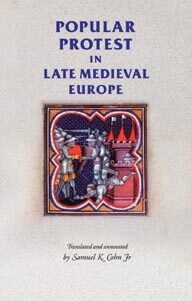