The imagination of politicians and publics around the world was captured in 2014 when a new terrorist organisation thrust itself violently and a little unexpectedly upon the world stage. Videos of Western hostage beheadings, the seizure of significant territory in Iraq and Syria, and – to cap it all – a declaration of statehood, thrust what became known, variously, as the Islamic State of Iraq and the Levant (ISIL), the Islamic State in Iraq and Syria (ISIS), Islamic State (IS) or, more pejoratively, Daesh, into the global limelight. Politicians in the United

T HE CENTRAL OBJECTIVE of this book is to help unlock an intriguing interdisciplinary puzzle relating to violence. Put simply, we ask ‘what is the relationship between the instrumental uses of violence, including its main forms, and the willingness of states to employ it?’ To answer this question, the book combines social-political and historical analyses. Its span is 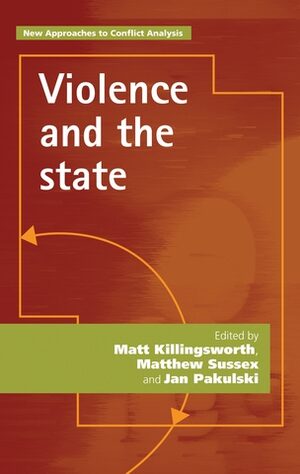 within the key structures of Israeli society, despite the ideology of equal inclusion in labour and defence that underpinned the pre-state period. Following the establishment of the State of Israel in 1948, the persistent security situation continued to impinge upon gender relations. However, the period of statehood established an additional factor in the social construction of biological difference

, 1998b : 215). The Middle East peace process 4 (MEPP) was an additional factor in problematizing the military–strategic concept of security in the Middle East. The MEPP fundamentally altered the structures and symbols of security and state-hood in the region, rendering the military option less popular, at least in the view of the international community. A more propitious climate for diplomatic

State violence and the eliticide in Poland, 1935-49
Abstract only
Jan Pakulski

Saint-Simon, an eccentric French aristocrat and founding father of sociology, uses the now-famous parable of ‘decapitation’ to illustrate the importance, in fact the social indispensability, of what he called ‘leading members’ of the ascendant ‘industrialist class’ – which closely approximates Vilfredo Pareto’s 1935 national ‘elite’ and Gaetano Mosca’s concept of the ‘ruling

economic development, social disparities, and minority/majority relations represented by diverse societal interests. The sources of EU influence are derived from its universalist values, democratic norms of political behaviour, policy tools, incentives and resources, a modus operandi of institutionalisation of relationships, and legitimising discourses. Their principal value added is the opportunities

ethno-territorially defined units with different status. On the first level were fifteen Soviet republics and six republics of the SFRY. They had all the institutional prerequisites of statehood, that is, political institutions, political symbols, constitutions and borders. Within those units, there were units of the second level, the autonomous republics, which also were ethno-territorially defined. While they enjoyed lesser

, Boutros-Ghali defined peace-building as ‘action to identify and support structures which will tend to strengthen and solidify peace in order to avoid a relapse into conflict’. 7 It is clear that the essence of this definition has shaped that employed by NATO, which states that: Peace building covers actions that support political, economic, social, and military measures and structures

E NVIRONMENTAL DEGRADATION and resource decline, and the important matter of how to overcome them, have become crucial challenges for the Asia-Pacific. While the policy debate is usually driven by economic and social concerns, there is a growing acceptance that these challenges also figure in the regional security agenda and, indeed, that they complicate that

Conclusions
Abstract only
Violence and the state - past, present and future
Matt Killingsworth, Matthew Sussex and Gavin Daly

different historical ‘societies’ of states, this thinking now extends beyond Europe to Asia as well. 7 On the inter-state level of analysis there is a growing sensitivity to war making as a complex interaction between social, cultural, economic and technological forces operating in conjunction with the state. 8 And there is a growing sense of the degree to which successful fiscal-military states evolved