Clear All
Download Citations
Page:1234567891011 ...
FOI in the UK
Abstract only
Survival and afterlife
Ben Worthy

7 FOI in the UK: survival and afterlife The development of FOI is a classic case of ‘back room in-fight and front stage dissembling’ (Kennedy 1978, 115). It is a tale of mobilisation and counter-mobilisation within institutional settings and of a small group of decision-makers, insulated from electoral pressure, changing their attitudes (Hacker and Pierson 2014). The first ‘radical’ stage created a proposal designed to fulfil Blair’s 1996 promise, in what amounted to a lightning strike against tradition. The rapid production of the paper was the key to its

FOI and the remaking of politics
Abstract only
Ben Worthy

10 FOI and the remaking of politics FOI regimes exist in a constant state of change and flux with conflicting pressures to expand and be dismantled. The dynamics and contradictions that form FOI laws are carried over into their implementation. The mobilisation and counter-mobilisation continue as resources, interpretation and support are contested over the fundamental questions of ‘what’, ‘to whom’, ‘how’ and ‘when’ (Barberis 2010, 122). However, reform attempts are uncertain and frequently short-lived. Remaking politics with FOI Patashnik and Zelizer (2013

FOI and public trust in parliament
Abstract only
Mark Mulqueen

5 FOI and public trust in parliament Mark Mulqueen Introduction It is often said that nothing ever changes when it comes to our political system. A consideration of the changes made in the Houses of the Oireachtas since the introduction of the Freedom of Information (FOI) Act back in 1997 demonstrates that this view is simply not true. An examination of attitudes towards members’ expenses and allowances is a case in point. Following the publication of the Act, there was a certain media frenzy regarding requests for records relating to expenses provided to 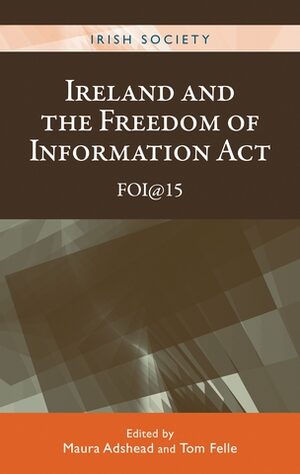 FOI: hard to resist and hard to escape
Abstract only
Ben Worthy

1 FOI: hard to resist and hard to escape Freedom of Information (FOI) laws are difficult to resist in opposition but hard to escape from once in power. A commitment to an FOI law sends out strong messages of radicalism, change and empowerment that new governments find difficult to resist. However, when politicians regret their promises, as they often quickly do, the same symbolism makes the reforms difficult to escape from. To make the picture more complex, FOI laws bring little external advantage and generate internal unhappiness. One of the central paradoxes

A glass half-full or half-empty? Citizens’ experiences with FOI
Abstract only
Tom Felle and Gavin Sheridan

7 A glass half-full or half-empty? Citizens’ experiences with FOI Tom Felle and Gavin Sheridan Introduction Ireland’s first Freedom of Information (FOI) Act lays down explicitly that ‘every person has a right to, and shall on request therefore, be offered access to any record held by a public body and the right so conferred is referred to in this Act as a right of access’ (Freedom of Information Act 1997, s 6). The long title of the original Act describes the legislation as ‘An Act to enable members of the public to obtain access, to the greatest extent possible

Ireland and the Freedom of Information Act
Abstract only
Editors: Maura Adshead and Tom Felle

Freedom of information (FOI) is important because it aims to makes government open, transparent and accountable. FOI legislation is based on the premise that people have the right of access to public documents, save for certain exemptions. The philosophy behind such legislation is that citizens have a ‘right to know’ how and why decisions are made by government in their name. In that context it could be argued that FOI legislation also has the potential to lead to more accountable government, less corruption and better democratic outcomes for states. This book traces Ireland’s experience of FOI legislation, from the first FOI Act in 1997, to the amendments that significantly constrained its provisions in 2003, to the proposed new revisions that will come into operation in 2013. Following from that, it looks at the operation and use of FOI from a series of perspectives: from a governmental perspective, taking views from public officials and politicians, in government and in opposition; from a state perspective, looking at the legal balancing act between keeping secrets and keeping government accountable; from a journalist perspective on the use and misuse of FOI; and from a citizen’s perspective, using FOI to develop active citizenship and engagement. Finally, taking all of these views into account, the book assesses the extent to which FOI has contributed to, and may continue to contribute to, political reform.

Introduction Maura Adshead and Tom Felle Freedom of information (FOI) is important because it aims to makes government open, transparent and accountable. FOI legislation is based on the premise that people have the right of access to public documents, save for certain exemptions. The philosophy behind such legislation is that citizens have a ‘right to know’ how and why decisions are made by government in their name. In this respect, it is often argued that FOI legislation also has the potential to lead to more accountable government, less corruption and better

Reflections on freedom of information
Abstract only
Past, present and future
Eithne FitzGerald, John Carroll and Peter Tyndall

8 Reflections on freedom of information: past, present and future Eithne FitzGerald, John Carroll and Peter Tyndall Introduction In this chapter we bring together a variety of expertise on Ireland’s experience with freedom of information. First, Eithne FitzGerald, the original Freedom of Information (FOI) Act’s ministerial sponsor and champion, explains what was intended and hoped for when the legislation was first introduced, and gives a critical reflection as to what was achieved. Second, John Carroll, a political adviser and public policy official, details

9 Conclusions Maura Adshead, Tom Felle and Nat O’Connor In the first chapter of this book, Nat O’Connor surveyed the international and comparative context within which we should situate our understanding of Ireland’s introduction of Freedom of Information (FOI) legislation. This overview revealed two key insights:  first, that there is plenty of well-established and long-standing international experience with freedom of information; and second, that this experience shows that FOI may be conceived of more narrowly, as administrative reform, or more broadly, as a