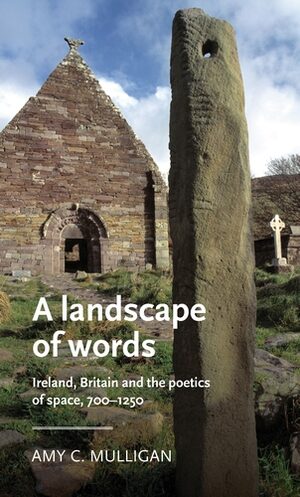 A landscape of words
Abstract only
Ireland, Britain and the poetics of space, 700–1250
Series: Manchester Medieval Literature and Culture
Author: Amy C. Mulligan

In recent decades, spatiality—the consideration of what it means to be situated in space and place—has become a key concept in understanding human behavior and cultural production across the disciplines. Texts produced by and about the medieval Irish contain perhaps the highest concentration of spatial writing in the wider medieval European milieu, and only in Ireland was a distinct genre of placelore formalized. As Mulligan shows, Ireland provides an extensively documented example of a culture that took a pre-modern ‘spatial turn’ and developed influential textual models through which audiences, religious and secular, in Ireland and Europe, could engage with landscapes near and far. Ireland’s peripheral geographic position, widespread monastic practices of self-imposed exile and nomadism, and early experiences of English colonialism required strategies for maintaining a place-based identity while undergoing dispossession from ancestral lands. These cultural developments, combined with the early establishment of Latin and vernacular literary institutions, primed the Irish to create and implement this poetics of place. A landscape of words traces the trajectory of Irish place-writing through close study of the ‘greatest hits’ of (and about) medieval Ireland—Adomnán’s De locis sanctis, Navigatio Sancti Brendani, vernacular voyage tales, Táin Bó Cualnge, Acallam na Senórach, the Topographia and Expugnatio Hibernica of Gerald of Wales, and Anglo-Latin accounts of Saint Patrick’s Purgatory. A landscape of words provides rigorous source analysis in support of new ways of understanding medieval Irish literature, landscape and place-writing that will be essential reading for scholars on medieval Ireland and Britain. Mulligan also writes for non-specialist students and researchers working on the European Middle Ages, travel and pilgrimage, spatial literature, and Irish and British history and culture, and allows a wide readership to appreciate the extensive impact of medieval Irish spatial discourse.

Unfolding Irish landscapes offers a comprehensive and sustained study of the work of cartographer, landscape writer and visual artist Tim Robinson. The visual texts and multi-genre essays included in this book, from leading international scholars in Irish Studies, geography, ecology, environmental humanities, literature and visual culture, explore Robinson’s writing, map-making and art. Robinson’s work continues to garner significant attention not only in Ireland, but also in the United Kingdom, Europe and North America, particularly with the recent celebration of the twenty-fifth anniversary of his monumental Stones of Aran: pilgrimage. Robert Macfarlane has described Robinson’s work in Ireland as ‘one of the most sustained, intensive and imaginative studies of a landscape that has ever been carried out’. It is difficult to separate Robinson the figure from his work and the places he surveys in Ireland – they are intertextual and interconnected. This volume explores some of these characteristics for both general and expert readers alike. As individual studies, the essays in this collection demonstrate disciplinary expertise. As parts of a cohesive project, they form a collective overview of the imaginative sensibility and artistic dexterity of Robinson’s cultural and geographical achievements in Ireland. By navigating Robinson’s method of ambulation through his prose and visual creations, this book examines topics ranging from the politics of cartography and map-making as visual art forms to the cultural and environmental dimensions of writing about landscapes.

1 Silent landscapes: rural settings, national identity and British silent cinema Andrew Higson Landscape and national cinema Since the beginnings of cinema in the 1890s, landscape has played a crucial role in the development of British national cinema. A  sense of national specificity in British films has been asserted in part through the representation of particular types of place, and through presenting such places in particular ways. From short scenic films in the late 1890s and early 1900s to the heritage films of the late twentieth and early twenty

5 The figure (and disfigurement) in the landscape: The Go-​Between’s picturesque Mark Broughton The prominence of the country estate as a setting in British cinema suggests that it would be fruitful to consider the aesthetic history of the landscape garden on screen. Yet, while a number of publications on landscapes in cinema have emerged, landscape gardens have received little attention, perhaps because of ‘heritage’ criticism’s refusal to address the roles played by country-​estate imagery and locations’ historical associations in films’ narratives.1 This

2 British landscapes in pre-​Second World War film publicity Paul Moody A romanticised concept of pastoral life was widely established in British culture by the start of the twentieth century, having been popularised by, among others, the pre-​Raphaelites as an ‘idealised medieval vision’1 since the late 1800s, and used as shorthand for the essence of the British national character, the pedigree of which was located in the ‘green and pleasant fields’ of the (mainly English) countryside. This conflation of land and identity circulated through popular, commercial

10 Folk horror and the contemporary cult of British rural landscape: the case of Blood on Satan’s Claw Paul Newland It’s in the trees! It’s coming! The Night of the Demon (1957); ‘Hounds of Love’, Kate Bush (1985) British rural landscapes have long operated as imaginative spaces in which horrific, ghostly or uncanny narratives unfold. One need think no further than the Gothic tradition in literature –​for example, representations of dark, menacing rural landscapes feature from Horace Walpole’s novel The Castle of Otranto (1763) through Mary Shelley

. Nonetheless, a remarkable plot twist demonstrates that there is ultimately no need for the poets to travel beyond Irish space, for narrative resides in the very contours of the landscape itself. As they begin their quest in Ireland, Muirgein, son of Senchán Torpéist, seats himself before a ‘bright, wonderful stone’ ( liic lúaichthech málgel ) marking the burial site of the ancient warrior Fergus mac Róich, a central character in the Táin . 5 When he chants an incantatory poetic verse to the stone, a

7 Thirteen ways of looking at a landscape: the poetic in the work of Tim Robinson Moya Cannon I owe Tim Robinson an enormous debt. Through his maps and writing he has introduced me, as he has so many others, to intimate corners of the landscapes and sea edges of the Aran Islands, the Burren and Connemara. Anyone opening one of Tim’s books or maps cannot but be immediately arrested by the quality of attention manifest there – by the combination of precision and resonance, the access to and obvious delight in a wide variety of academic disciplines and yet the