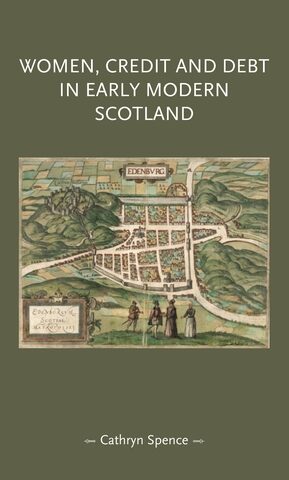 This text provides the first full-length consideration of women’s economic roles in early modern Scottish towns. Drawing on tens of thousands of cases entered into burgh court litigation between 1560 and 1640 in Edinburgh, Dundee, Haddington, and Linlithgow, Women, credit, and debt explores how Scottish women navigated their courts and their communities. This includes a consideration of the lifecycle stage of these women, and whether those active in litigation were wives, widows, or singlewomen. The employments and by-employments that brought these women to court, and the roles these women had in the economy, are also considered. In particular, this book explores the roles of women as merchants and merchandisers, producers and sellers of ale, landladies, moneylenders, and servants. Comparing the Scottish experience to that of England and Europe, Spence shows that through the latter half of the sixteenth century and into the seventeenth century women were conspicuously active in burgh court litigation and, by extension, were active and engaged participants in the early modern Scottish economy. This book reevaluates what we thought we knew about women in the early modern period. As such, it will be of particular interest to those studying and teaching Scottish social and economic history and valuable to anyone studying the history of work and gender. It will also appeal to all feminists who have an interest in how women negotiate economic roles.

months serve to illustrate both the diverse ways in which people, and particularly married women, engaged in networks of debt and credit in early modern Scotland, how frequently they might do so, and what the litigation resulting from these networks could reveal about women’s economic roles. Marion and Patrick are shown to be moneylenders, landlords, and consumers, while the people with whom they contracted these debts acted as borrowers, tenants, and ale sellers. Roles changed depending on the transaction at hand, and networks were forged between multiple people and

‘For her interest’
Abstract only
Women in debt litigation
Cathryn Spence

four towns that help bring to light the real and dynamic role that women played in the economy of debt and credit in early modern Scotland, whether acting as wife, widow, or servant. This chapter examines the ways and extent to which women were involved in the debt and credit networks of Edinburgh, Dundee, Haddington, and Linlithgow between 1560 and 1640. Their involvement is explored through their appearances as both creditors and debtors in the burgh court records throughout the different stages of the life cycle. The categories of women under consideration were

, while cloth and wine were common imports. Secondly, as merchandisers, a larger number of women, of a wider range of social statuses, were involved with the retail of imported and ready-made goods. These women, who came from high, middling, and lower social standing, sold cloth, wine, and miscellaneous items termed ‘merchandise’ in small amounts to a wide range of consumers. As a result, the different manners in which women in early modern Scottish towns participated as merchants and merchandisers were similar to the distinction made by Maryanne Kowaleski in her

. Upon transcription of these cases, the sheer number of women who were active in debt litigation became a focal point. When imagining the burgh courts of early modern Scotland, I believe most people picture them as populated almost exclusively by men. As this book has shown, this was not the case. Instead, women asserted themselves in these courts, suing and being sued for amounts of money both large and small, and arguing their cases on a daily basis. Thus, this book moved from simply identifying the activities in which women were engaged to a quantitative

of the early modern Scottish diet. Further, the extent to which women appear in the records as purchasers of the raw materials associated with the production of ale and as distributors of the finished product attests to ale being a craft whose production fell primarily under the purview of women in Scotland. Although previous studies, particularly those concentrating on England between 1300 and 1640, have argued that women had mostly disappeared from the drinks trades by 1600, this does not seem to have been the case for Scotland.1 Although the roles of women in

Female servants as creditors and debtors
Abstract only
Cathryn Spence

payment of 30s (a not insignificant sum for a servant at this time), was a participant in this changing world, whether she knew it or not. Servants like Janet represent a unique grouping of women as regards economic life, especially in early modern Scotland. The classification of ‘servant’ explicitly denotes neither age nor marital status, yet when considered as part of the life cycle servants were, by definition, young and unmarried and, indeed, it is overwhelmingly life-cycle service that has been uncovered for early modern Scotland. Although these servants are often

Owned, loaned, and pawned
Abstract only
The control of property
Cathryn Spence

was thus another manner in which women could participate in the economy of early modern Scottish towns by providing a necessary service that seldom left evidence in the debt records. Women’s roles as landladies, as evidenced through both the 1635 Annuity Tax Roll for Edinburgh and debt litigation, help to illustrate the importance of this type of endeavour to women of all marital and social statuses. Requiring only a spare room to participate, women of lower social statuses could acquire a valuable source of income. At the same time, renting out property was

Polity, discipline and theology
Abstract only
The importance of the covenant in Scottish presbyterianism, 1560–c. 1700
R. Scott Spurlock

Church polity and politics in the British Atlantic Chapter 5 Polity, discipline and theology: the importance of the covenant in Scottish presbyterianism, 1560–c. 1700 R. Scott Spurlock W hilst some of the chapters in this volume focus on conceptions of church government and the use of the keys, the present chapter will discuss early modern Scottish presbyterian understandings of ecclesiology and who was understood to be the subject of the keys. A number of recent studies have demonstrated the fluidity of polity in seventeenth-century Britain, which is