Clear All
Download Citations
Page:12
All the frontier’s a stage
Abstract only
Deadwood
Elisabeth Bronfen

Beginning with a macabre performance of a scene from King Lear in Deadwood, this chapter focusses on the Shakespearean dramaturgy of this TV drama. The overarching claim is that David Milch rethinks the Western genre by tapping into Shakespeare’s trope of the world as stage. Al Swearengen’s monologues with the head of a dead Sioux chief as well as the way he conceives of his balcony as his private stage, are read in conjunction with the theatricalization of power in Hamlet. The dramatic tension between legitimate and rogue power at issue in Al’s claim to sovereignty also brings the genre of comedy into play. Characters and the role they play in the dramatic action in Measure for Measure and As You Like It are crossmapped with the set of characters that perform their parts on the thoroughfare of this camp town. The topsy-turvy world of comedy is further revisited in the enmeshment of parallel storylines in Deadwood. Oscillating between the various players and those who orchestrate the drama, this serial mode of narration draws into focus that there is no one unequivocal centre, putting into question the omnipotence of Al’s visual regime. At the same time, Shakespeare is shown once again to write the prototypical American myth, the Western frontier. 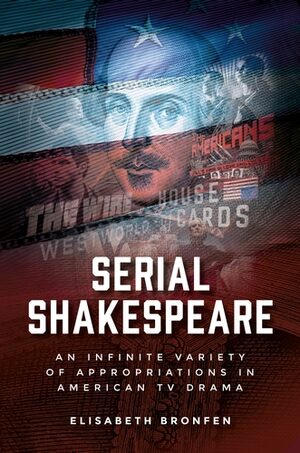 Carnival of spies
Abstract only
The Americans
Elisabeth Bronfen

The reading offered in the final chapter is not predicated on any explicit citation of Shakespeare in The Americans. Instead, it conceives of cold war politics in Washington D.C. in the 1980s in terms of Shakespeare’s carnevalesque comedies of transgression. On the one hand, the fact that cross-dressed Viola and the Fool find themselves shuttling between the court of Orsino and Olivia in Twelfth Night is used to theorize the position of the disguised Russian agents, playing their part of subterfuge in the struggle between the U.S. and the Soviet Union. On the other hand, the confusion A Midsummer Night’s Dream performs by making use of a magic love juice is used to think through the enchantment ideology works by transforming the vision of those whose eyes (and minds) it infects. The spy work the Jennings undertake is read in terms of a carnevalesque play with identities, taking place in a heterotopic space that transforms the ordinary city into a dreamlike stage. As in the comedies, this means that while their performance of Americanness invariably moves toward a moment of disenchantment, waking from this dream draws into focus the conundrum of closure in serial drama, which by definition is open-ended.

This is the first of two chapters focussed on the representation of the first female president in TV drama. It begins with a reading of House of Cards and Claire Hale Underwood’s rise to power through the lens of Macbeth. In a second step, it offers a typology of queenship in Shakespeare’s plays, with the Princess in Love’s Labour’s Lost as a representative of the comedies on one end, Queen Margaret as a representative of the history plays in the center, and villainesses from the tragedies, such as Tamar in Titus Andronicus on the other end. The point of connection is that in Shakespeare’s plays as in TV drama a mixture of cultural fascination and anxiety regarding female sovereignty is put on display. In a final step, this chapter offers an overview of the first wave of women to gain access to the Oval Office on screen – Caroline Reynolds in Prison Break, Mackenzie Allen in Commander in Chief, Allison Taylor in 24 and Elaine Barrish in Political Animals. Elizabeth McCord in the final season of Mme Secretary is shown to offer yet a further variation on the female politician’s struggle for acknowledgement in face of severe opposition from her peers.

The introduction begins by drawing attention to the ubiquitous presence of Shakespeare in contemporary TV drama and then turns to an engagement with the critical scholarship regarding his adaptation and appropriation in new media. It addresses the fact that what is unique about this study is that the TV shows to be discussed offer a revisitation and rereading of his plays that transform these into something different without making any claim to fidelity. At the same time, two different aspects regarding this transhistorical and transmedial dialogue are drawn into focus. On the one hand, contemporary TV drama cites and resignifies Shakespeare. On the other hand, a critical reading, having noticed this exchange, or rather discovered a line of connection between the two, can profit from it. The critical concept proposed for this hermeneutic process is crossmapping. The overarching claim is that despite the historical distance and the difference in dramatic format, Shakespeare’s aesthetic formalisation of intense passions are still a barometer for what can be shaped, thought and performed today, not least of all because we are again thinking, writing and living in a period of interim.

For a discussion of the second wave of first female presidents in serial TV drama, Derrida’s critical term rogue is deployed so as to underscore the fragility of their legitimacy. At issue is the way they repeat and refigure the previous female presidents in TV drama, underscoring both the anxiety regarding their political power as well as their resilience as politicians. Bringing Shakespeare’s ambivalent representation of queenship into play, the crossmapping pairs Selena Meyer in the political satire Veep with the humiliation of the queens in A Midsummer Night’s Dream. Elizabeth Keane in the conspiracy thriller Homeland is read as a resuscitation of Queen Margaret in the first tetralogy, given that she, too, is caught up in an internal strife among her peers. The couple, Olivia Pope and Melanie Grant in Scandal, in turn, is read as a feminist refiguration of Antony and Cleopatra. Their battle for the Oval Office is read as a jubilatory spin on the defamed exotic queen of this late Roman play, with ancient Egypt revisited in the deep state allegedly embedded in Washington D.C. and its corrupt politics. The open-ended serial format is shown to play into a need to articulate the ambivalences attached to the political figure of the first female president.

Serial Shakespeare explores the dissemination and reassemblage of Shakespeare’s plays in contemporary media culture, regarding the way this taps into but also transforms his preferred themes, concerns and constellations of characters. The appropriations discussed include isolated citations in Westworld and The Wire, a typology of the first female president modelled on figures of female sovereignty, as well as a discussion of what one might call a specifically Shakespearean dramaturgy in Deadwood and The Americans. By proposing a reciprocal exchange between the early modern plays and contemporary serial TV drama, the book focusses on the transhistoric and transmedial dialogue a revisitation of the Bard entails. The readings consider the Shakespeare text again, from a different perspective, but also address the fact that his text comes back to us again, from the past. The book claims that serial TV drama keeps appropriating Shakespeare to give voice to unfinished cultural business regarding the state of the American nation because both share the sense of writing in and for a period of interim. Given that the Bard continues to write and read America, what the book draws into focus is how both scriptwriters and cultural critics can, by repurposing him, come up with narratives that are appropriate to our times.

The chapter begins by exploring the use Westworld makes of quotations from Hamlet to discuss the way Shakespeare haunts this serial TV drama in the manner of a ghost, a spectral presence. The chapter then moves to a set of quotations from Romeo and Juliet and The Tempest, uttered by a malfunctioning host. By crossmapping both plays with Westworld, what is at stake is the way these citations bring with them some of the concerns shaped in the plays from which they originated, notably the relationship between the exploitative power of theater in The Tempest and the equation of violent delights and violent ends in Romeo and Juliet. Shakespeare is shown to write the prototypical American myth, the frontier, in its digital refiguration.

Wearing the crown
Abstract only
The Wire
Elisabeth Bronfen

This chapter reads The Wire with Shakespeare’s first tetralogy, proposing an analogy between the war on drugs in Baltimore at the beginning of the 21st century and his historical reenactment of the War of the Roses. At issue in both is the deployment of systemic cycles of violence predicated on a struggle between political legitimacy and legitimation. At stake also is the theatrical display of power that connects Shakespeare’s world to that of The Wire, even while both tap into a rhetoric of surveillance. The theatre audience, like the audience of the TV drama, is shown to be made complicit in the violent traffic performed on stage, page and screen.

Conscious disguise and mistaken identity run through most of Shakespeare’s comedies as a theme, and they are central defining aspects of his romantic comedy. Underlying the pattern is a version of love which sees through superficialities to an inner compatibility between characters. It also raises questions of role-playing and its significance in love relationships. All these elements, in some shape or another, also occur regularly in Hollywood romantic comedy, and the disguises may involve not so much gender as in Shakespeare, but social and professional status. The rich impersonate poverty to test love, the poor play roles of higher social status to attract love, but the basic metaphor is as in Shakespeare’s disguised women in As You Like It and Twelfth Night.

The Conclusion draws together some of the threads running through this book pertaining to love conventions evident in modern movies which, it is argued, are influenced by Shakespeare’s comedies and tragedy of love. Infatuation, romance, attachment, and loss, are all defined in his plays in ways which reappear in modern movies – not, it is argued, as a result of ‘universals’ but a specific line of cultural influence running from Shakespeare’s theatrical practice down to the love stories of modern movies which are in turn so pervasively influential over modern conceptualising of love, at least in the Western World.