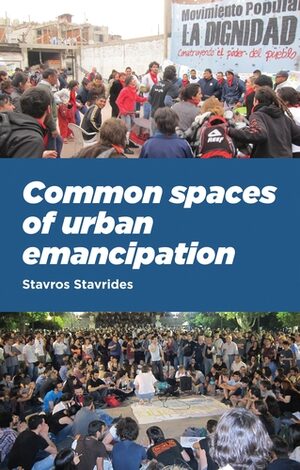 Especially focused on the ways spatial form can organize (form-as-organization), express (form-as-expression of values), and materialize (form-as-construction process) spaces of commoning, this chapter sketches the theoretical trajectories that will be developed throughout the book with the help of concrete research examples. By understanding architecture as an intellectual practice that focuses on the shaping of space, its role in developing an awareness of the potentialities of space and in searching for spatialities of emancipation is explored.

Autonomous neighborhoods in Mexico DF, organized by the direct participation of their inhabitants and through explicitly politicized movements, have developed to concrete examples of a different form of social organization, based on equality and sharing. Analyzing two of them, La Polvorilla (part of an initiative by a movement called Los Panchos), and Tlanezi Calli (created by the Brújula Roja movement), the chapter explores the emancipatory potentialities of the urban autonomy project and its relation to urban commoning practices. The definition of a shared territory became crucial for the autonomous urban communities. People in the reclaimed land of those neighborhoods do not aspire to create their “own” safe havens in the middle of highly dangerous urban periferias. They rather attempt to construct shared housing areas to live in, which may be considered as materialized examples of a different kind of urban co-habitation. Excerpts from interviews with leading activists of both neighborhoods are included.

This chapter focuses on the history and the current potentialities of a social housing complex in Barcelona (Bon Pastor), which may be considered both as emblematic and exceptional: emblematic because in its history and in its threatened everydayness it epitomizes the commoning spirit that prevails in such urban communities, and exceptional because it has not only become the site of important struggles connected to shared values and aspirations based on community experiences but also the focus of an international architectural competition meant to explore alternatives to “urban renewal”. The chapter includes an interview with an important activist of the Bon Pastor struggle.

Brazilian Homeless Workers associations, organized in the context of very active movements struggling for the right to housing, not only participate in the design of their future social housing complexes but are educated by groups of activist housing experts (including architects, sociologists, economists, urban planners etc) to be able to work in the construction process efficiently and through organized forms of collaboration. The work of the group USINA analyzed in this chapter is characteristic in its emphasis on the tradition of mutual help (mutirão). Deeply influenced by the relevant ayuda mutua tradition of Uruguayan Housing Cooperatives (FUCVAM), USINA’s projects develop the potentialities of urban commoning through a direct involvement of the future inhabitants in the construction process. The chapter includes an interview with one of the USINA architects.

Based on the argument developed throughout the book, emancipation is shown to be a process which potentializes relations of commoning in the direction of equality and solidarity. This concluding chapter summarizes the argument and shows how the different forms of spatiality through which contemporary urban form and experience is shaped (territory, public space, housing and object) define possible levels of spatial organization in which inhabited space is potentialized through commoning. In the cases explored in this book, spaces of commoning were actualized not as bounded places but as areas with porous boundaries. The Zapatista territory, the Bon Pastor, and La Polvorilla neighborhoods, the occupied spaces of the squares movement and the alternative learning space developed out of an arrangement of collectively constructed chairs, are all spaces that communicate with their outside. Thus, in conclusion, it is suggested that the image and the experience of the threshold becomes important, both as part of an interpretative effort and as part of an emerging spatial politics of emancipatory commoning. Commoning as a force that challenges enclosure may flourish in open communities which develop by including newcomers. Commoning is a process that gestures towards an emancipating society as long as it becomes metastatic, ever-expanding, and inclusive.

The research methodology on which the book is based is explained in this chapter. Participatory study through activist research is described along with credits for those who took part in the process (including those interviewed).

Objects in common: objects for commoning
Abstract only
Stavros Stavrides

In this chapter an artistic practice involving a performative interpretation of an everyday mundane object, a chair (designed by the modernist architect G. Rietveld), is analyzed as indicative of the power to potentialize space which is hidden in the production and use of everyday objects. Objects may become mediators of sharing, and carriers of an open community of commoners in the making. The project “Sitting is a Verb” seems to hint towards such a possibility. This project took place at IMPA, a recuperated factory in Buenos Aires (2010–2011. A visual artist, Aimée Zito Lema, and a social anthropologist, Nahuel Blaton, conceived this project as an artistic contribution to a larger project: the creation of a University of Workers inside the IMPA building complex. This project tried to orient the means through which its contribution to the emerging University of Workers (to be hosted inside IMPA) was realized towards a commoning ethos. Beyond the distinction between a useful object and an art object (considered as an object of no use), the Rietveld-IMPA chairs were art-works by being useful (as functional) but also by being emblems of cooperation, symbolic condensations of an emerging autonomous education spirit. Excerpts from an interview with the artist are included in the chapter.

Reclaiming public space as commons: the squares movement and its legacy
Abstract only
Stavros Stavrides

In this chapter a re-appraisal of the squares movement (2011–2013) is developed by focusing on characteristic forms of public space appropriation that may be considered to constitute examples of a new kind of space-sharing, as well as a promising set of ways of sharing through space. What constitutes the core of the proposed argument is that we can establish an interpretative analogy between actual changes (collectively imagined or projected ones) in occupied spaces and changes in the subjects of action (stemming from experienced identity crisis). For this, three terms are proposed in order to analyze the process of collective identity formation through commoning practices: transposition (visiting otherness), translation (creating passages to existing or potential identities), and transformation (becoming other). This chapter includes an interview with an important activist of the Gezi Park occupation (Istanbul).

This chapter opens to the possibility of human emancipation through a rethinking of space: space considered both as a concrete social reality (city, house, public space, territory) and as a form, a pattern, which is employed, along with other forms, to reproduce the contested meanings of social reality. What makes space a means to control both the shared experiences and their representations, is what gives space the power to shape possible experiences. The capacity to produce spaces and to think through spaces is a human ability which, as language, is never reducible to concrete social realities. This capacity corresponds to a potentiality that transcends any actual social reality. Central to this chapter is an approach to the potentialization of space as a way to develop commoning practices with an emancipatory power and prefigurative characteristics