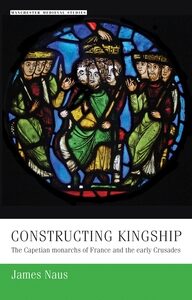 The capetian monarchs of France and the early Crusades

‘A book that will be of use to students of kingship, holy war, and the cultural tumult of the central Middle Ages.'
Matthew Gabriele, Virginia Tech
Medieval Review

‘Constructing Kingship is a valuable book which engages seriously with a theme, the impact of the crusades on royal action and ideology, which has been, as Naus points out (pp. 6-7), overlooked for far too long. Its central thesis is a stimulating argument which will hopefully inspire further research on this topic, and throughout the book Naus highlights many fascinating links between the crusades and the Capetian monarchy which are rarely considered together. The highlight of the book is undoubtedly the third chapter's marvellous textual analysis of Suger's Gesta Ludovici Grossi, which sheds important new light on one of 12th-century France's most important narrative sources.'
Mr Niall Ó Súilleabháin , Trinity College Dublin
Reviews in History
September 2016

‘Naus has put his stamp on this most critical topic, and his book will now serve as a starting point for discussion of it.'
Jay Rubenstein, University of Tennessee-Knoxville
H-France Review Vol. 17, No. 34
February 2017

‘Overall, one will find this book an intelligently well written study, which is to serve as basis/groundwork for further research on this subject.
Boris Gübele, Göttingen
Historischen Zeitschrift Heft 309/1