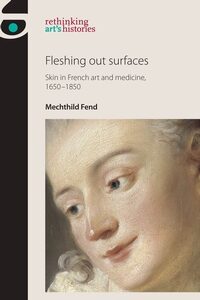 Throughout the history of European painting, skin has been the most significant surface for artistic imitation, and flesh has been a privileged site of lifelikeness. Skin and flesh entertain complex metaphorical relationships with artefacts, images, their making and materiality: fabricated surfaces are often described as skins, skin and colour have a longstanding connection, and paint is frequently associated with flesh. This book considers flesh and skin in art theory, image making and medical discourse and focuses on seventeenth to nineteenth-century France. It describes a gradual shift between the early modern and the modern period and argues that what artists made when imitating human nakedness was not always the same. Initially understood in terms of the body’s substance, of flesh tones and body colour, it became increasingly a matter of skin, skin colour and surfaces. This shift is traced in the terminology of art theory and in the practices of painting, as well as engraving, colour printing and drawing. Each chapter is dedicated to a different notion of skin and its colour, from flesh tones via a membrane imbued with nervous energy to hermetic borderline. Looking in particular at works by Fragonard, David, Girodet, Benoist and Ingres, the focus is on portraits, as facial skin is a special arena for testing and theorising painterly skills and a site where the body and the image made of it become equally expressive.

‘Fleshing Out Surfaces is indispensable reading for anyone interested in the cultural construction of the body and the theory and practice of portraiture. Fend's focus on the representation of skin, and the connections she makes between medical and anatomical treatises, Enlightenment philosophical considerations of body and self, and seventeenth- and eighteenth-century aesthetic theory provide a productive vocabulary for talking about portraiture, and indeed about visual culture more broadly.'
Amy Freund
Oxford Art Journal

‘Fleshing out Surfaces makes for a rich and fascinating read. Fleshing out Surfaces contributes significantly to a growing body of work on the history of representing human skin in art and science by scholars such as Mieneke te Hennepe and Ann-Sophie Lehmann, among others.'
Marieke M. A. Hendriksen
A Journal of eighteenth-century art and culture
March 2018