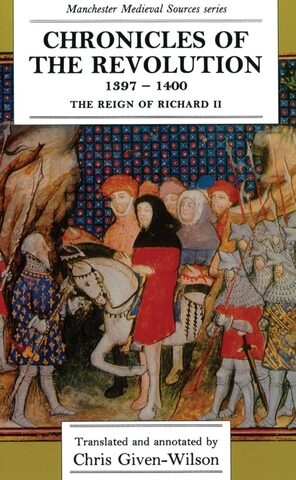 The reign of Richard II

This book covers one of the most controversial and shocking episodes in medieval English history, the 'tyranny' and deposition of Richard II and the usurpation of the throne by his cousin, Henry Bolingbroke, who became King Henry IV. Richard's deposition was arguably the most portentous event in the political history of late medieval England. The book represents all the principal contemporary chronicles from the violently partisan Thomas Walsingham, chronicler of St Alban's Abbey, who saw Richard as a tyrant and murderer, to the indignant Dieulacres chronicler, who claimed that the 'innocent king' was tricked into surrender by his perjured barons. Of the three most substantial contemporary chronicles which cover the earlier part of Richard's reign, two cease before 1397: namely the Westminster Chronicle, which ends in 1394, and the Chronicon Henrici Knighton, which peters out in 1395. Fortunately, the third, the Chronica Maiora of Thomas Walsingham, continues through the revolution of 1399 and well beyond, right up to 1420. The Lancastrian, French and Cistercian chronicles are the principal narrative accounts of the years 1397-1400, though they are not the only ones. The book focuses on the course of the Bolingbroke-Mowbray dispute, or his description of the early events of the 'Epiphany Rising'.