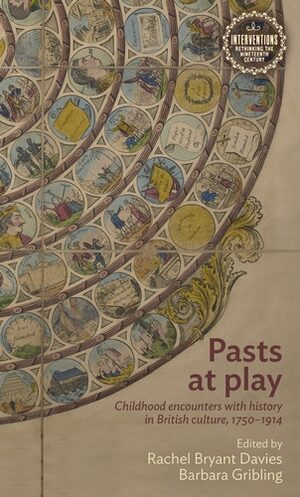 Pasts at play examines nineteenth-century children as active consumers of a variety of British pasts, from the biblical and classical to the medieval and early modern. This interdisciplinary collection bridges different disciplinary approaches to chart shifting markets for historical education between 1750 and 1914: a critical period in the development of children's culture, as children became target consumers for publishers. Boys and girls across the social classes often experienced different pasts simultaneously for the purpose of amusement and instruction.
Play provides a dynamic lens through which to explore children’s interaction with the past as a didactic vehicle. Encompassing the past as both subject and site for production and consumption of earlier pasts (historical, mythical or imagined), each contributor reconstructs children’s encounters with different media to uncover the cultural work of individual pasts and exposes the key role of playfulness in the British historical imagination.
These ten essays argue that only through exploring the variety of media and different pasts marketed to children can we fully understand the scope of children’s interactions with the past. Sources, from games to guidebooks and puzzles to pageants, represent the range of visual, performative, material and textual cultures analysed here to develop fresh methodologies and new perspectives on children’s culture and the uses of the past.
Bringing together scholars from across a range of disciplines, including Classics, English and History, this volume is for researchers and students interested in the afterlives of the past, the history of education, and child consumerism and interaction.