The cultural construction of the British world

This book collects eleven original essays in the cultural history of the British Empire since the eighteenth century. It is geographically capacious, taking in the United Kingdom, India, West Africa, Hong Kong, and Australia, as well as sites of informal British influence such as the Ottoman Empire and southern China.
The book considers the ways in which British culture circulated within what John Darwin has called the British “world system”. In this, the book builds on existing imperial scholarship while innovating in several ways: it focuses on the movement of ideas and cultural praxis, whereas Darwin has focused mostly on imperial structures —financial, demographic, and military. The book examines the transmission, reception, and adaptation of British culture in the Metropole, the empire and informal colonial spaces, whereas many recent scholars have considered British imperial influence on the Metropole alone. It examines Britain's Atlantic and Asian imperial experiences from the eighteenth to the twentieth century together.
Through focusing on political ideology, literary movements, material culture, marriage, and the construction of national identities, the essays demonstrate the salience of culture in making a “British World”.

‘This collection brings cultural histories of British imperialism into conversation with studies of the British world-system. “Culture” here knows no bounds. It hails politics, the popular, military, capital and the body – not simply to show their interconnections but to track the ways that empire itself both integrated and compartmentalised the terrains it aimed to colonise. The case studies assembled here illustrate the dynamism of imperial power, pointing to new domains of inquiry and opening familiar subjects up to fresh interpretive possibilities.'
Antoinette Burton, Professor of History and Bastian Professor of Global and Transnational Studies at the University of Illinois

‘This volume brings together some of the most eminent scholars of British imperial history, and provides a thought-provoking showcase for a range of innovative approaches to the cultural history of empire. The essays set new agendas for future research, and offer fascinating insights into the cultural connectedness of a once-British world.'
Simon J. Potter, Reader in Modern History at the University of Bristol 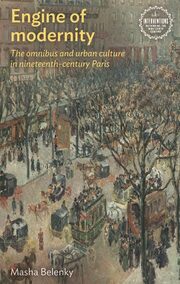 The omnibus and urban culture in nineteenth-century Paris