New Approaches to Conflict Analysis promotes the development of new theoretical insights and their application to concrete cases of large-scale conflict, broadly defined. The series intends not to ignore established approaches to conflict analysis and conflict resolution, but to contribute to the reconstruction of the field through a dialogue between orthodoxy and its contemporary critics. Equally, the series reflects the contemporary porosity of intellectual borderlines rather than simply perpetuating rigid boundaries around the study of conflict and peace. New Approaches to Conflict Analysis seeks to uphold the normative commitment of the field’s founders yet also recognises that the moral impulse to research is properly part of its subject matter. To these ends, the series is comprised of the highest quality work of scholars drawn from throughout the international academic community, and from a wide range of disciplines within the social sciences.

M. Anne BrownHuman rights and the borders of suffering: the promotion of human rights in international politics

Greg Fry and Tarcisius Kabutaulaka (eds)Intervention and state-building in the Pacific: the legitimacy of ‘cooperative intervention’

Naomi HeadJustifying violence: communicative ethics and the use of force in Kosovo

Richard JacksonWriting the war on terrorism: language, politics and counter-terrorism

Adrian MillarSocio-ideological fantasy and the Northern Ireland conflict: the other side

Maria SternNaming insecurity – constructing identity: ‘Mayan-women’ in Guatemala on the eve of ‘peace’

Virginia TilleyThe one state solution: a breakthrough for peace in the Israeli–Palestinian deadlock

The right of Tim Aistrope to be identified as the author of this work has been asserted by him in accordance with the Copyright, Designs and Patents Act 1988.

The publisher has no responsibility for the persistence or accuracy of URLs for any external or third-party internet websites referred to in this book, and does not guarantee that any content on such websites is, or will remain, accurate or appropriate.

This collection interrogates the representation of humanitarian crisis and catastrophe, and the refraction of humanitarian intervention and action, from the mid-twentieth century to the present, across a diverse range of media forms: traditional and contemporary screen media (film, television and online video) as well as newspapers, memoirs, music festivals and social media platforms (such as Facebook, YouTube and Flickr). The book thus explores the historical, cultural and political contexts that have shaped the mediation of humanitarian relationships since the middle of the twentieth century. Together, the chapters illustrate the continuities and connections, as well as the differences, which have characterised the mediatisation of both states of emergency and acts of amelioration. The authors reveal and explore the significant synergies between the humanitarian enterprise, the endeavour to alleviate the suffering of particular groups, and media representations, and their modes of addressing and appealing to specific publics. The chapters consider the ways in which media texts, technologies and practices reflect and shape the shifting moral, political, ethical, rhetorical, ideological and material dimensions of international humanitarian emergency and intervention, and have become integral to the changing relationships between organisations, institutions, governments, individual actors and entire sectors. 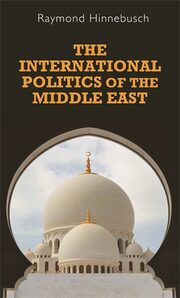 The international politics of the Middle East

This text aims to fill a gap in the field of Middle Eastern political studies by combining international relations theory with concrete case studies. It begins with an overview of the rules and features of the Middle East regional system—the arena in which the local states, including Egypt, Turkey, Iran, Israel and the Arab states of Syria, Jordan and Iraq, operate. The book goes on to analyse foreign-policy-making in key states, illustrating how systemic determinants constrain this policy-making, and how these constraints are dealt with in distinctive ways depending on the particular domestic features of the individual states. Finally, it goes on to look at the outcomes of state policies by examining several major conflicts including the Arab-Israeli conflict and the Gulf War, and the system of regional alignment. The study assesses the impact of international penetration in the region, including the historic reasons behind the formation of the regional state system. It also analyses the continued role of external great powers, such as the United States and the former Soviet Union, and explains the process by which the region has become incorporated into the global capitalist market.