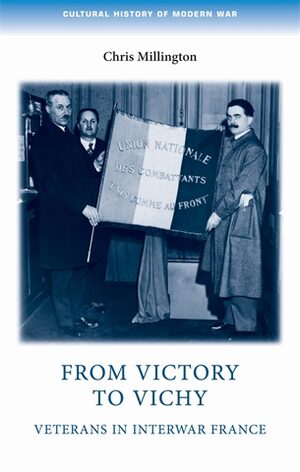 From victory to Vichy

The most up-to-date and comprehensive English-language study of its kind, From victory to Vichy explores the political mobilisation of the two largest French veterans’ associations during the interwar years, the Union fédérale (UF) and the Union nationale des combattants (UNC). Drawing on extensive research into the associations’ organisation, policies and tactics, this study argues that French veterans were more of a threat to democracy than previous scholarship has allowed. As France descended into crisis, the UF and the UNC sought to extend their influence into the non-veteran milieu through public demonstrations, propaganda campaigns and the foundation of auxiliary groups. Despite shifting policies and independent initiatives, by the end of the 1930s the UF and the UNC had come together in a campaign for authoritarian political reform, leaving them perfectly placed to become the ‘eyes and ears’ of Marshal Pétain’s Vichy regime.

‘[Millington] effectively disproves the idea that veterans' associations were obstacles to the development of fascism or unflagging supporters of democratic values. Along the same lines, Millington does not argue that these veterans brought Vichy into existence, but he contends that they prepared the ground for such a regime... [He] does well to identify larger trends amid a cacophony of veterans' voices and near continuous political change... [From Victory to Vichy is] a well-written work and an important contribution to the history of veterans and politics in interwar France.'
Gregory M. Thomas
American Historical Review
December 2013

‘Millington's book remains an important one. Historians of France during the 30s may dispute his conclusions, but they cannot afford to ignore it.'
Antoine Prost
First World War Studies, Vol 7 No 1
September 2016

‘An important study, and, in its particular focus on the more right-wing UNC, a useful counterpart to Antoine Prost's influential work. Despite its avowed refusal to categorize these movements or ascribe them definitive identities, the book does, in fact, offer a valuable analysis of veteran mentalities, and its publication in a 'cultures of war' series is thus particularly apt. Indeed, the book will also be of special interest to those researching cultural demobilization - which, as Millington amply demonstrates, could be a dangerously uneven process.'
Jessica Wardhaugh
H-Sozu-Kult
April 2014

‘French First World War veterans' associations have been at the centre of a long and bitter controversy between historians. While French academics, such as Antoine Prost, argued that these associations, despite their inherent antiparliamentarianism, were integrated in an inter-war democratic political culture, the 'immunity thesis', France's allergy to fascism, has been attacked vehemently by scholars such as William Irvine, Robert Soucy or Kevin Passmore... [Millington] excels in bringing new elements to an old debate in order to deconstruct a binary vision.'
Bernard Wilkin, University of Sheffield
French History
April 2016

‘From Victory to Vichy is essential reading for anyone interested in interwar political culture, European veterans' movements, and the persistence of war cultures. The book is clearly written and organized, which makes it accessible to advanced undergraduate and graduate students. It is also impressively researched; Millington has mined the archives holding papers on the UNC, UF, and Croix de Feu, in addition to using a wide variety of newspapers and other published sources. This research has produced an important and original contribution to a crucial period in the history of the Third Republic and twentieth century France.'
Caroline Campbell, University of North Dakota
Contemporary French Civilisation, 38 (2)
April 2016

‘The main strength of the book is its ability to explain something obscure in Inter-War French history, by setting a context, and then explaining its significance. This is a pattern repeated in each chapter-an overview of the subject is given, then a setting of the broader context before showing how the veterans movement fits into this. The effect of this is to widen the appeal of this book beyond those interested solely by veterans in Inter-War France, and will make this book useful to students of 1930s France...'
Mason Norton, Edge Hill University
Modern and Contemporary France
April 2016